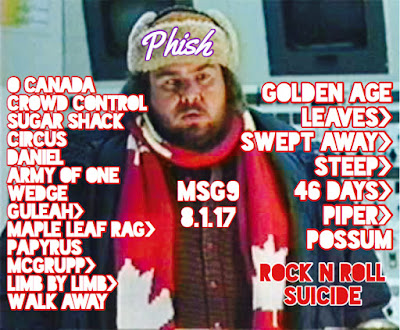 The remainder MSG run will be webcast at LivePhish.

Here's what you missed on Tuesday... 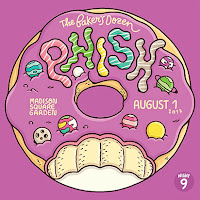 Tuesday Donut: Maple Glaze... Would we fade TTE and its "maple" lyric? I prepared for its arrival and prayed they'd leave it locked up in the basement with Jennifer Dances... Deadhead friends from Cincy arrived for weekday shows. I was finally the youngest person in the crew! The coolest aspect of catching all 13 Baker's Dozen shows is seeing them with different friends catching 2-3 shows at a time. On the flip side, the Cincy crew arrived with fresh legs and hit the ground running, while I dragged ass after eight shows in 10 days. I couldn't keep up... Serious bad back day. I relied on combo of painkillers, Chinese herbs, and sheer will to gut through the show... Phone ran of juice. Thank God! First time in 2 weeks I wasn't bombarded with nonstop messages for the Coventry Hippie Travel Agency, Sportsbook, Nerd Stats and Herbal Apothecary... Wine-drenched cougar with rock size of a golfball wedding ring texted cat emojis back and forth with Trey's wife preshow. She asked me how times I saw Phish. I said, "At least 360." She replied, "Oh, you're one of those freaks!" She then whispered "A capella Oh Canada is gonna be the opener." I dismissed it until Phish opened up with Woodstock-distorted version of Canada's national anthem, while a massive spotlight illuminated the flag hung from the rafters. MSG is also a hockey arena and heard Oh Canada played at NY Rangers games numerous times... I always make small talk with security guards/ushers at Phish shows and inevitably drop a "the circus is in town" joke... Daniel bustout... Page squeezed Scott Jolin's Maple Leaf Rag in the middle of Guleah Papyrus... Sublime McGrupp and those Hosers, eh!.... Octopus drummer on Limb... Sneaky Tweeprise tease in Walk Away. High alert Trey wank factor during homage to Joe Walsh. Leo slays those covers, eh?... Phishkid next to me took his 60-year old father to show. Old guy toked more weed than me and raged Walk Away... Golden Age nod to all the Brooklyn hipsters. Another 20+ deep dong jam... Steep>Swept Away highlight of night for me. More sideways parallel universe jamming. Gordo unleashed bowel-rattling bombastic brown-note. Wonder how many spunions shat themselves?... The threesome (35-min worth) of 46 Days > Piper > Possum capped off the set... Rock n Roll Suicide Bowie cover ended the somewhat short show... No TTE. Huge victory!... Faded all night, but survived the show... 9 down, 4 more to go.

johnny linen said…
@help. this sites usually got them

johnny linen said…
oops. i meant this one
http://thecurtainwithblog.blogspot.com/

njgr81 said…
Thanks for your efforts during this run Argo.
I regret to inform you these droids are broken.
(or my laptop is crap)
anyone else having issues w/ these?

njgr81 said…
Thanks nulabs. I suspected it was my computer. Tried chrome and firefox and keeps getting stuck. No issues with any of the other BD shows. Guess ill try again tomorrow. The funny thing is i used to happily wait weeks for tapes and now Im jonesing cause i cant instantly grab last nights show.
8/02/2017 9:32 PM