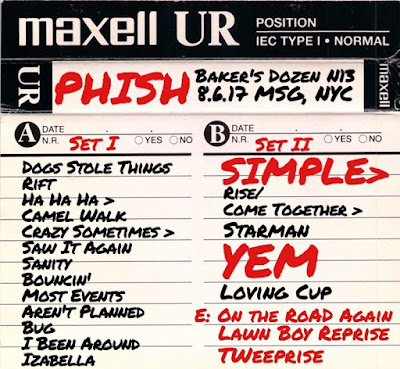 Never miss a Sunday show, especially when it's Night 13 of the Bakers Dozen. Final night at MSG. Let's get the show on the road...

The finale of the MSG run will be webcast at LivePhish. 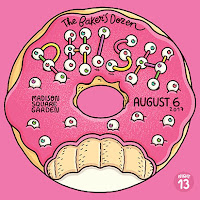 SUNDAY Donut: Glazed... Extended-curfew rumor popped up early in weekend. Nah, just another two-setter... During an ultimate quest for no repeats, Phish still surprised us... Javier scored me a ticket for second show in row... Phish went deep deep down the bench in the first set with a Dog Stole Things opener. Flashbacks to 97 with DST in heavy rotation... Ha Ha Ha always fun for the acidheads... Camel Walk desert funk in the city... Friends texted, "At start of Saw It Again, the look Gordo gave Trey was priceless." Gordo didn't like getting ripcorded from Trey's alien anal probe story... Sanity always a mental health check at shows. I always failed. Whatever, send more valium... Bouncin' will always be a #Paulytakesapisssong... Most Events Aren't Planned another side project deep cut from Page's Vida Blue days, which everyone knows is the dankest and baddest side action in all of Phisdom... I pointed at the crowd for the "overrated" segment of Bug... More Leo love with I Been Around. Yeah, he's been working on his new side group with DFA's Shit Robot and James Murphy, who prepared 13 rails for Leo at setbreak in his dressing room... The Izabella everyone has been waiting for. Return of Machine Gun Trey. I caught one at MSG in 97 and I lost my mud. 20 years later and my mud got tossed like a noobstain... Godzilla-like Simple opened the final set. It lived up to the hype... TAB song sorta killed the buzz of the set, but they boys got the heat right back with a sizzling Starman that had little more juice than Vegas Halloween... Sideswiped by emotional peak during Starman. Lightning rod moment when all your drugs are peaking and CK5's illuminating the entire room and everyone else is hitting their own personal-peak moment simultaneously. Intense. This jaded vet finally understood what @randonmsugirl was talking about "Ah, the feels"... Didn't have any time to dwell on tsunami of feels, because Trey ripped into YEM and the entire room kicked it into another gear as the show headed into the final stretch... Stones' Cup capped off the set... The 13-banner got raised and I saw Phish raise one before Melo and the Knicks... Tear-jerking cover of On the Road Again... Followed up by Lawn Boy Reprise. Wet Deck Alert Reprise... Gordo's Weekapaug intro (never played the other night whenever the fuck that was)... Capped off by the Tweeprise everyone was waiting for... Show 13 of 13 dunzo.

Thanks Argo! Been an amazing run! Thanks for all the donut droids!

what a run, I'm an emotional basket case. Argo, if we are ever at a show together I would love to buy you 13 of the headiest beers of your choice

I'll chip in on that deal. You rule the nation Argo. Be at Dicks?

Thanks for the links all these show. Much appreciated.

It's depressing when the tour comes to an end. The music stops and so does activity on the ol coventry blog. Oh well...'til next time. Thanks Pauly and Argo for making this a great run from here in my computer room!

Argo, we can't thank you enough for your generosity and diligence in sharing these tasty droids with all of us. MVP honors right here folks.

And a round of applause for Pauly, for not only surviving the BD, but hitting 13/13 on his 420-word recaps and arriving safely back on the west coast.

Depending in what community you reside in there area unit many ways that for you to get your bulk candy machines. you'll search via the net and you'll notice many websites that have photos and rating. however if you're merely beginning out your best course of action is also to shop for a second user machine initially.If you want to read more about Keurig Coffee Routes then please click here to continue.