George Clinton and the P-Funk All Stars - 5/13/06 - Fillmore Auditorium, Denver 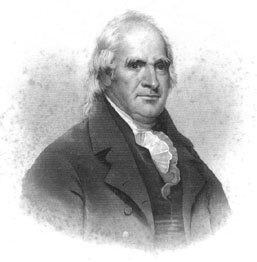 It's hard writing the first sentence, so I made it easy by typing this particular sentence. Now it is time to talk about the show. Joining me and Da Pickl at the show were Dan and Janet Baker from off of Exit 420 on Route 69. For this reason, Molly couldn't attend the show.

After a stop at Sancho's Da Pickl and I left Dan and Janet behind to go find spots on the rail. We entered the Fillmore, and were pissed to see that they brought the tables back out. That little shit lied to us last time! I was tempted to hunt him down, but opted instead for a Fat Tire. We did get lucky and find four spots in the corner of the rail nearest the stage just above the floor. Standing next to me was this guy wearing a blue blazer with a crest. He had this cheesy little mustache. He was a nice enough guy, but more than a bit odd. Who the hell wears a blue blazer with a crest to a George Clinton show? He ended up standing next to us the whole show - not leaving even once, even to piss. At least he kept quiet.

Opening the show was a local band called Yo Flaco. Their website says they are a Colorado based Hip Hop / Acid Jazz band. I guess that is what we got. I am not a fan of a lot of hip hop, and this band really didn't do it for me. The drummer was good, as were the horns. I was just not impressed with the white guys rappin'. At least there was a beat, which kept me from having to talk to Cresty.

The Bakers had shown up by the time the main event started. The lights went up, and Garry "Starchild" Shider came out. 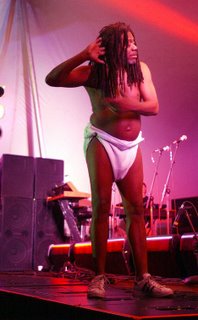 He was wearing a red sparkly jacket with matching red sparkly Huggy Bear hat and white diaper. The band started up, the jacket and hat were set aside, and we were off. After about six minutes, George came out. He was wearing a big white t-shirt for this show. He was all smiles.

I don't know what songs were played or the order they were played (I do remember "Whole Lotta Shakin' Going On") I am pretty sure they played a good hunk of these (scroll to the bottom). George spent a good portion of his time just directing the action and grooving along, with periodic (OK, more than periodic) taking of the singing lead. This was alright, as the men and women who were singing when George wasn't are great.

One of the back up singers was a white chick dressed almost exactly like Madonna in her early years. The only thing missing was the 95 rubber bracelets. She was a butter face, but she had nice legs in those fish net stockings. We got some good ol' GWBush slamming when the half naked dude decked out in a white feather pimp hat and white feather boa (he was way more cut that Garry Shider - it was apparent because he was much younger and didn't have his pot belly hanging over a diaper.) yelled out "Fuck George Bush" during one of the later songs. That got a big cheer from the crowd (though I don't know how Cresty felt about that - I didn't ask him.)

The band didn't stop the entire time they were on the stage. It was high energy all the way. The place was hot. Shows in May at the Fillmore are hard to attend because the room get really warm. George was showing this as the top half of his t-shirt was soaked in sweat. But he kept going. Toward the end of the show about 20 young hotties from the audience were invited on stage. I put the binoculars to good use.

At midnight, the lights came on mid song, and the power to the stage was cut. All you would hear was the drums, a couple of horns, and the singing. The band quickly finished the song, and the show was over. This bothered me quite a bit. i've seen several shows at the Fillmore, and I have never seen this happen. Usually they just fine the band for each extra minute they play. The only reason I can think for this happening is the make-up of the crowd. I am only speculating here, but I suspect it is because there were a good number of black people in the crowd (as there should be.) The crowd was good the entire time. Nothing outrageous happened. I don't think it would have happened if it was a crowd full of hippies, like I usually see. At any rate, it was quite disappointing.

The show was awesome. Everyone had a great time and were glad I suggested it. Now comes the quest for a copy of the show.

(I inadvertently posted a picture of George Clinton, the first Governor of New York and 4th Vice President. Here is the picture I should have posted. It would have been interesting to see 18th century George Clinton get his funk on though.) 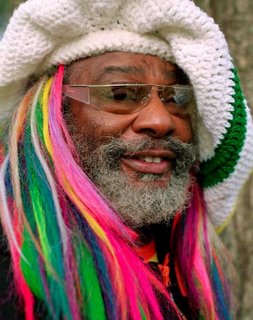