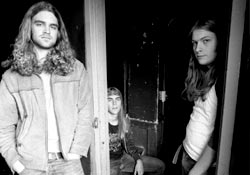 The guys at Rose Hill Drive are the best band you never heard of. Before I visited Colorado last summer, I never even knew they existed until the Joker took me to a a street fair in Louisville, CO.

We also found out that there was a cool band paying in a small town just outside of Boulder called Louisville (pronounced Lewis-ville). The Joker ate breakfast frequently at The Buff which was owned by this hot woman. She had two sons who were in a band called Rose Hill Drive that kicked ass. One fan described them as a power trio. Just a drummer, guitar player, and bass player, who was the lead singer.

The Joker said they looked like a rock and roll band. All the members were long hairs and had stage presence. They sounded a little bit like Led Zeppelin and had a grooving G'ovt Mule vibe to them. The lead singer's voice was commanding and the guitar player displayed serious chops. They were all under 21 years old. Damn, they could fucking play.

Anyway Rose Hill Drive played an outdoor show for the Louisville Main Street festival. Inside the tent were tons of local high school girls. All I could think about was that line from Dazed and Confused... "That's what I like about highschool girls. I get older and they stay the same age."

I felt like Wooderson. The band impressed me and the local talent in the crowd was even more impressive.

Yeah, that was my initial thoughts about Rose Hill Drive. They are made up of two brothers, Jake and Daniel Sproul. Jake plays bass and Daniel plays guitar and lead vocals. The were formed when they were still in Junior High and have been picking up buzz in Colorado over the past few years. The bands name pays homage to the street where the Sproul brothers grew up. They might be hitting the road for some epic tour dates, but they'll never forget their roots. They have also jammed with Warren Haynes, who added them to his Mountain Jam Festival in upstate NY.

I downloaded a few of their shows and I'm still impressed. According to Jambase.com, they are releasing their first studio album on June 6 that is self-titled.

If you have a chance to see Rose Hill Drive this summer... don't miss out. These kids kick ass and there are hordes of hot young women at their shows! They are playing CBGBs in NYC next week, in addition to performing at Wakrusa in Kansas. Rose Hill Drive is also going to Europe playing dates in England and Spain before they return to the States to play shows in Texas and California.

I saw those guys open for Govt Mule at the Fillmore in 2005. They were awesome. Good hard driving music. Daniel came out for the encore "How Many More Years" and traded solos with Warren.

My friend Da_Pickl really likes them, even making the trek to Vail a couple of times to see them.

thewholive.tv - I have just found out that Rose Hill Drive will be on In The Attic with Rachel Fuller at Leeds on June 25. It will be before they go on stage so will be on at about 5.30 UK time at www.thewholive.tv

Rachel does a show called In the Attic with Pete Townshend from The Who. It should be an amazing show.