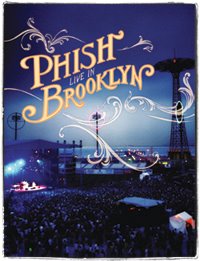 Yes, it's finally coming out. Phish will be releasing the DVD of their 2004 June concert at Keyspan Park in Coney Island, Brooklyn. It will be in stores on July 11th.

The Joker, Bruce, and I were both at that epic show and it rained cats and dog for like 75% of the show. The one thing I recall was the Divided Sky encore. I wrote a mini-recap on the Tao of Pauly.

Set I: Song I Heard The Ocean Sing, Dinner and a Movie, The Curtain With, Sample in a Jar, The Moma Dance > Free, Nothing, Maze, Frankenstein

The DVD also includes some of the soundcheck and bonus material. That show would be the first of six that I'd see on that tour. The Joker and I caught both Brooklyn shows, two at SPAC, and the last two shows ever at Deer Creek.

Here are some notes that I scribbled down about that show:

6.17.04 Brooklyn: Joker points out twirling girl... guy in skirt with three foot chiquita banana... rain falling during Free looked awesome in the purple lights... security guards couldn't catch a fence jumper... shaking lights in the rain on the crowd was cool... raindrops the size of silkworms... Gil had the biggest umbrella, ever... I can see the PJs, the Cyclone (rollercoaster), the beach, and the subway from my seat... let's go out to dinner and see your boobies... thanks guys for Divided Sky encore