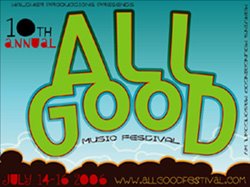 I just read on Jambase.com that Trey Anastasio and Mike Gordon will be playing with the Benevento/Russo at this year's All Good Festival. The 10th incarnation of the West Virginia music festival takes place on July 16th thru 18th. Have you seen the line up?

"Sickness!" as Daddy would say.

Daddy has been talking up the party and scene Marvin's Mountaintop ever since I met him. He thought that All Good was the best music festival around, better than Coachella, Vegoose, and Bonnaroo.

Here's the All Good 2006 Confirmed Artists:

Wow... Galactic, GreyBoys, Robert Randolph, Tea Green Leaf, and Umphrey's all at the same festival? Holy shit. I have towait to go next year. If I didn't have to work in Las Vegas that month, I would be there.
Posted by Pauly at 4:20 PM