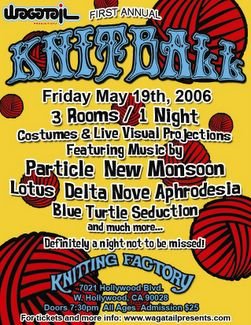 I'm going to a concert at the Knitting Factory in West Hollywood on Friday with Change100. Two of my favorite bands Particle and Lotus are playing at the first annual Knit Ball, which features other bands such as New Monsoon, Delta Nove, Aphrodesia, and Blue Turtle Seduction. Here's how the promoters describe the night:

I'm pumped to see some music while I'm out in Hollyweird. I've never been to the west coast version of the Knitting Factory. Senor and I have seen dozens of shows there in NYC. The original Knitting Factory was located in a building in SoHo that used to be a knitting factory... hence the name. Thousands of illegal immigrants used to work there. Now hipsters snort coke in the bathrooms and buy over priced pints of Brooklyn Lager at the bar while they listen to a dozens bands that sound like poorly orchestrated rip-offs of Velvet Underground. Lou Reed would piss and shit in those guys ears if he heard their noise.