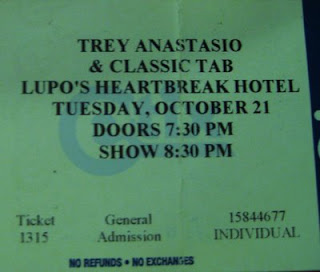 I took the train from New York to Providence. I rode business class which included power outlets. Very clutch since I brought my laptop and I'm addicted to the intertubes. I listened to a Dead bootleg from 1978 while I played online poker and gazed out the window at the magnificent foliage of New England. I played for less than an hour and won enough money to pay for my train ticket. I did not even arrive in Rhode Island and I was already having a sensational trip.

I went up to Providence to visit one of my best friends Senor. We had seen numerous Phish shows together. Too many to count. He went to Japan with me in 2000 to see Phish. Senor is married with two kids and doesn't see as many shows as we used to back in the day. That's what made the Trey show in Providence a little extra special since I got to go see it with someone who loves music as much if not more than me.

We had a mellow pre-party at Blake's and I drank with some Deadheads. We went inside around 8:20 and the floor was already packed. We headed upstairs to the balcony. We snagged third row seats and were ready for the festivities to begin...

Set II: Push on Til the Day, Gotta Jibboo, Drifting, Simple Twist Up Dave, Water in the Sky@, Brian and Robert@, Get Back on the Train@, A Case of Ice and Snow, Tuesday

The last time I was at Lupo's was like five years ago and I saw Dark Star Orchestra. It was in a different location then and I sort of dug the new space similar to the Beacon Theatre in NYC or the Orpheum in Boston. The sound was muffled at times but the overall quality was better than the shitty acoustics of Roseland Ballroom.

I wasn't expecting the opener of Come on Baby Lets Go Downtown. Trey appeared ready to let loose from the start of the show with an uplifting version of a Neil Young cover. Yeah, Trey was just getting warmed up.

Last Tube has several operatic moments. That's what I jotted down in my notes. I'm not the biggest fan of that song. And that's what I love about live shows. Sometimes you are forced to sit/stand/dance through a song that you might otherwise skip if listening on your iPod or in your car. But the magic occurs when you hear a version of a song you really don't care for and it sucks you and simply kicks your ass. You almost feel like a total moron for not appreciating the song much earlier. Well, that's what their version of Last Tube did to me.

Next up was an old school TAB song that the name escaped me. The Joker told me that it was called Tube Top. I knew I heard it before. Delicious version. The first three songs were not songs that would have been at the top of my list to hear, however, each of them more than satisfied my musical needs along with the majority of folks in my section. They were dancing like fiends.

I thought that Sweet Dreams Melinda killed the momentum of the set. A little too slow but a slightly sloppy version. Trey made up for it with Cayman Review, a daily staple that has been in heavy rotation during the Northern Exposure Tour. It's one of my favorite TAB songs because the prevailing Latin-influenced reggae-funk beat gets my ass shaking.

Ooh Child came out of left field. Actually it hopped the left field wall, sprinted across the diamond, and dove head first into home plate. Never expected to hear that bust out. Trey crooned the crowd. I saw one Phishy chick weeping. Tears of joy.

Trey and the band have Alaska down pat. Each version I hear gets tighter and tighter. Catchy lyrics. Upbeat tempo. Senor heard it for the first time and was singing along by the end of the song.

I must have listened to Trey's Brooklyn show a hundred times. I wasn't too fond of Backwards Down the Number Line until now. Again, it was one of those songs not on the top of my list to hear, but man was I wrong. I'm so glad that I didn't make it a Pauly's Gonna Take a Piss Song. I jotted down the word "poignant" in my notes to describe that Backwards Down the Number Line.

Gone was another new tune that I did not see last week at Roseland. It was OK and it appeared to abruptly end early. I dunno if it was supposed to do that or they had technical difficulties. They milled around for a bout a minute or so before they played Sand to close the set. One of the highlights for sure with an enticing sustained climax.

The highlight of the show, the moment when I was like "Wow, Trey is tearing this shit up like John Holmes deep dickin' a high school girl" occurred during Push On Til the Day. The always gregarious Trey was ever more hyper and happy and jumping up and down and all around his little octagon of a Persian rug that he stands on onstage. The second half of Push On seized a hold of everyone in the balcony. They were on their feet. Dancing. Jumping. You could feel the vibrations and slight bounce of everyone grooving to the invigorating start of the second set.

Trey kept up the momentum with a crowd pleaser. Gotta Jibboo had a few mutated solos from Trey and I couldn't get enough.

A mellow Drifting cooled things off a bit before Simple Twist Up Dave. I think that's one of the songs that sounds better when arranged with the horns.

Trey played three solo acoustic songs... a slow and twangy Water in the Sky, a sulky Brian and Robert and a spicy version of Get Back on the Train.

I'm still mixed about A Case of Ice and Snow. I thought it was misplaced in the set. Senor absolutely loved the song. When the first few notes of Tuesday began, Senor turned to me and asked if that was a Pauly's Gonna Take a Piss Song I told him that it wasn't but Ice and Snow should have been.

The encore was First Tube and crowd delved into a feeding frenzy. The first part featured the band with several explosive solos from Big Red. As the song progressed, several friends took the stage. A older guy in a baseball hat appeared from behind the drum kit and started banging on a single drum behind Russ. A couple of seconds later, Russ hopped out of the kit and the old guy slid in. He looked a lot like Billy Kruetzman from the Grateful Dead. He even drummed a lot like him mentioned Senor. Yeah, it was him. Russ stood behind his kit and beat on the single drum, while Tony left the stage and Oteil Burbridge took his place. A couple of minutes later, Scott Murawski on guitar, joined the mix. They jammed out for several more minutes to end the encore and the entire show.

Lupo's blew away Roseland. The sound was better. The playing was tighter. The crowd was much cooler. No one was really talking over the playing like they did at the Roseland show. That sort of puzzled me and bothered me in the same instance. Too many hipsters and scenesters at the NYC show. The Providence show had a lot more respectful fans which added to the overall enjoyment factor to the show.
Posted by Pauly at 1:00 AM

"deep dickin' a high school chick" is the best description ever! Good morning to me!

Now THAT, is a quality Tuesday night.