Turns Out You Can Dance in Tight Pants

Driving to St. Pete from to see a show needs to be well timed. Leave too early and you’re twiddling thumbs cursing the ghosts of Dale Mabry Highway; too late and you miss a Howard Franklin Bridge sunset. 7:07 PM, caught a ride from Professional Concert-Goer Dennis Dillishus and his girlfriend, a long time The Faint fan who clued me in on some Faint history. We were well equipped, a cold 60 Minute IPA and new play-list courtesy the girlfriend: Justice, The Sounds, MSTRKRFT and Crystal Castles worked well with the flowing traffic and sand red skies. Is it me, or did Tropicana Field start looking like a real stadium? –World Series cred I guess. Stopped at a friend’s who lives in walking distance to Jannus – he also had beers and music – Left Hand Milk Stout along with TV on the Radio’s Dear Science. We hit the streets to get there early and check out ’s Summerbirds in th 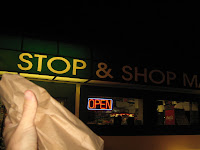 e Cellar. They’re playing the opening spot for The Faint’s four shows. It’s got to be a tough position. You can’t get much going when you’re only given enough time to play five songs. Frustrating, but they’ll be playing in sometime in the middle of December, location TBA. Hopefully they’ll book a New World Brewery show. If and when, it’ll be a must see. These guys break some indie rock traditions – well placed, subtle harmonies and good songwriting against quality electro that will pulse and groove. The band had been spending some time in the music mecca of , they’ll be back home writing and recording for the next few months. 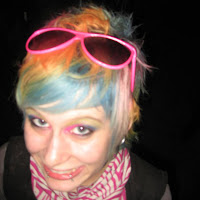 It’s been about 15 years since Wesley Snipes single-handedly killed the fashion of flip-up bicyclists hats, let it be known that they have risen from the grave – I counted no less than three on the walk to Jannus. The preshow vibe outside Jannus was almost nonexistent and the bouncer at The Pelican wasn’t very optimistic, “it’s pretty weak so far” – good thing I don’t go round soliciting bouncer’s opinions. I made the rookie move of buying a beer on the go with a full bladder. And, what’s with these supposed cold activated blue mountains Coors Light is peddling? I’ve had a few in the past months, they’ve been cold, but I haven’t spotted any blue mountains. Bullshit, like their flavor. Best preshow news? Rumors circulate about Rob Schneider sightings. He’s supposedly cruising St Pete with a blue Mohawk and a few catch phrases – no doubt banking on a drunk hussy looking to live out some Hollywood fantasy.

9:09 PM, "Did you guys like that track I was playing earlier?” The Show is the Rainbow front man and lovable attention whore Darren Keen asked the crowd after his first song. The Show is the Rainbow is supporting The Faint for two weeks, and Darren Keen wanted you to know that he is very grateful for that – though not as grateful for any audience I would bet. The quip was only a glimpse of the hilarious banter and musical theater Darren Keen was getting ready to emit for the next hour. He cued up a string sample for the second song, grabbed his Fender and broke into a disco-rock number. TSitR is a one man show, although he brings a drummer to play along with his occasional guitar play and Macintosh computer.

“That song was about fucking while you’re freezing to death in an alleyway.” Hmm, who knew? Keen peered over into the front row, “I smell weed.” He then cued a Pink Floyd inspired arpeggiated loop and informed us that the next song was, “…about a guy who liked butt-sex with guys, but got a new girlfriend who doesn’t and so he has to find prostitutes.” Moving on from banter to stage direction, he asked for audience hand claps and took to robot voices. Many in the crowd were wondering just what the hell they were seeing, it was about to be a whole lot more of Darren Keen. His rock star persona and girth immediately conjure thoughts of Jack Black. But it was more like if Jack Black was from , never found his KG and took too much acid. I thought it was spectacular. After a failed attempt at an anonymous crowd survey, followed by on stage moonage and a rant about acting your age he popped his top and showed off his new tattoo of the logo for Retard Disco Records who he had just signed with. Now shirtless and sweaty they played a song about “Hitler and his meth mouth” – I couldn’t make out all the lyrics, but the first line was “I am a Siamese Duck.” A rant on Hugh Laurie’s keen ability to diagnose the misdiagnosed at the last possible second followed by a faux stage dive (thank god) and a triumphant stage return – made even more triumphant by asking the crowd to “...cheer really loud when I get back on stage like you guys are real happy to see me again.” TSitR finished off his set of danceable indie rock hip hop by running out into the crowd with his wireless mic and climbing the tree (audience assisted) in the middle of the Jannus Landing pavilion to serenade us. It was rock star retard in full glory. “Here comes the fucking Faint!” Keen yelled. Most in the crowd couldn’t wait. 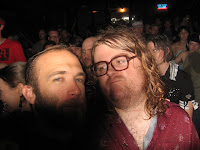 $8 dollar generic beers in plastic cups taste much better at a ball game. $10 Gonzo Imperial Porters in plastic cups at least have a semblance of music behind them, and at 9.2% ABV can hold you down for a long set of good music. Coming on promptly at 10 o’clock, The Faint took the stage to some hungry fans – evidently they hadn’t played in since sharing a co-bill with Bright Eyes quite a few years ago. The crowd was packed in tight under the red and white striped tent then sparse on back to the sound board. The lead singer was wearing what looked to be a Calvin Klein designed lab coat with WWII aviator goggles. That turned out to be fitting, The Faint create a music experiment that sits on the cusp of dance party and indie noise-rock show. It works. The band had the crowd’s attention from the start - even those in the back choosing elbow room over proximity were staring intently. They were too transfixed on the music to notice the hub-ub behind them; security had to eject a sizable group. I couldn’t make out exactly what was going on, the men in the yellow shirts all took the company line and refused comment. Although, I swear I saw something in their eyes when I asked if Deuce Bigalow had anything to do with it. If the music wasn’t so good, I would have pressed them further. After a lively opening track that I didn’t catch the name of, The Faint went into Glass Danse followed by Take Me to the Hospital, a song not found on any album, but with enough deep bass and chopped beats to get all those under the tent shaking asses. Professional Concert-Goer Dennis Dillishus turned to me and said, “These indie rock kids better have their Chucks tied tight or they’re going to get funked right out of em.’” Pretty spot on, I thought. Mixing songs from their newest album Fasciinatiion along with older tracks - Forever Growing Centipedes, Posed to Death, Psycho - kept the energy high. The smell of something magically delicious started floating around, turned out to be a cherry blunt - good work hipsters. It was enough to get me over the sight of yet another muscular guy in an Ed Hardy t-shirt blocking my view. 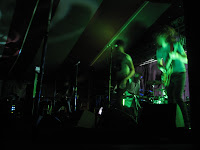 After a solid hour, the band stepped off stage, the crowd played their role as encore demanders and The Faint obliged – as if there was any doubt. At this point the dance party had spilled back another 20 feet for another few tracks with the band calling it a night just a bit after 11:15. Some rumblings surfaces about Rob Schneider and some type of “bathroom incident” - not sure what that was all about. The Jannus Landing horse troughs always make for awkward times, maybe Deuce Bigalow had enough of that guy in the Ed Hardy t-shirt, lord knows I have.

Labels: Jannus Landing Summerbirds in the Cellar The Faint The Show is the Rainbow