Editor's Note: Here's a guest post from a cool guy I met on tour this summer. Tom will offer up a different and unique perspective on the band and community. Enoy!

Confessions of a 3.0 Phan

Some of my favorite memories revolve around the Decembers of my youth. It isn’t one particular moment that stands out; I think life has to be lived a little before we can accrue enough perspective to recognize the sentinel moments when they happen. No, these are memories of an overarching time and place. The wonder in the air as the weather turned brisk, the music on the radio turned sappy, the lights on the house turned gaudy and I turned into a selfish little toy monger, carried with it a certain type of magic that gradually starts to fade as we get older and see things more clearly.

It’s funny because, by and large, I do not carry a lot of memories from the Christmas Mornings of my childhood. No, it is that last week of school and that final few days before Christmas Eve that stand out. The anticipation, the lists, the last minute push to make sure all behavior was modified just in case a final display of good behavior was required to get my name implanted firmly under the “Nice” heading on the Big Man’s binder full of boys and girls. That is what I remember with great fondness.

I thought my days of spending December getting worked into such a frenzy that only the grandest of times could contain the ferocity of my of my excitement once it was unleashed onto the world were long gone. Never again would I spend nearly 10% of the year, an entire month, pretty much unable to focus on anything other than one happening so massive that it dwarfed all other components in my life. Until 2009 that is; the year I attended my first Phish show. Now here I am in 2012, preparing for my second NYE pilgrimage to MSG and I am, quite literally, like a kid on Christmas Eve.

So yeah, the cat is out of the bag. The scarlet letter has been affixed. I am a 3.0 nube. 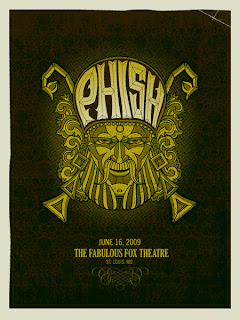 I was not at Coventry, I was not at Big Cypress, I sure as hell was not at Plattsburgh. I was, however, at the Fox Theater in St. Louis on June 16th, 2009 and I have been at 17 shows since. I have spent many nights at home watching every available webcast and streaming in pirated broadcasts of the shows that were not available. I have 99 Phish albums in my iTunes library and I have listened to every single song. I even spent two hours in the car last week comparing nearly 20 years of live performances of Fluffhead to seek a greater understanding of the band’s evolution. I have read a few books, supported the charities and I plan my work travel schedule and mini-vacations around Phish tour. I am committed, I am intense, I am still treated like an outsider by many tour vets.

Leading up to MSG, I am going to write a few posts for all you fine Coventry readers sharing my perspective as a highly dedicated, intensely passionate, fresh off the boat lover of (almost) all things Phish. I do not really know where this will lead and I have way too many topics in mind to cover everything I want to discuss in just a few posts over the next few weeks but hopefully we can all have some fun with this and use it as an opportunity to share an outlet for all the pent up excitement before lights go down on December 28th (only 17 f’ing more days!).

For this inaugural post I am going to focus on what is most important, the music. Primarily the live experience but I have some thoughts on the studio stuff as well.

3.0 Phish is the tightest and most powerful this unit has ever been. Period. I do not care how amazing of a time you had a Lemonwheel or Vegas ’96. It is great that you hold so dearly to those hazy, drug fueled super parties of your youth. Obviously, I can not speak to the scene or the experience but I can critique the music and most of 3.0 blows the other eras away. Especially 2.0. Good lord, I love a 47-minute Runaway Jim as much as the next guy but if you just sit back and listen to those shows, it is amazing the band retained any credibility or brain cells for that matter. There is something to be said for the adventurousness of many 2.0 shows but what they added in creativity they lost in quality. Give me a tight, focused 8-minute Ocelot over some whacked out, 27-minute, machine gun Split Open and Melt any day.

Which brings me to my next point, quit being assholes and hating on anything from Joy. I get that is a bit of a departure stylistically and it is a far cry from the mind bending, drug induced psychedelic wizardry from days of yore but... A) it’s good, well written music, and B) Trey clearly loves that shit.

On a personal level, I hate feeling like a leper just because I like to get my groove on to Backwards Down the Number Line but as a fan it pisses me off to see this loyal and wonderful group of people turn on somebody who has provided them with so much joy (pun intended) through the years. Trey has gone through hell and back and these tunes are so obviously close to his heart. How about showing a little respect and not letting out a collective groan and starting a mad dash for the bathroom the second you hear the first notes of Kill Devil Falls?

Did you guys used to treat anything from Farmhouse with such disdain? I’m curious as to how, when and why Twist and Heavy Things went from being buzz kills and became staples.

Now that I have gotten that little rant off of my chest, I think I will wrap up "Confessions Vol. 1" with a few thank yous. First and fore most, thank you to the band. You guys are amazing and you have changed my life for the better. You have allowed me to open up my mind to new things (not chemically induced either) and you have served as the backdrop for many of the best nights in my life over the past three years. Phish has been the vehicle for many friendships gained and strengthened over the past 3 years and I am seriously grateful. Thank you to Pauly for being an example of why Phish culture can be so damn exciting and inclusive. Also, thank you, Pauly and the Coventry Crew for giving me this space to share some of my thoughts. Finally, thank you to all the phans out there who have helped me on my journey. 90% of the people at every show are just the most amazing, caring, generous folks one could ever hope to meet. As for the other 10%? Well, that seems like a good topic for next time.

Tom B. can be found on Twitter at @tbrecken.
Posted by Pauly at 4:20 AM

Email ThisBlogThis!Share to TwitterShare to FacebookShare to Pinterest
Labels: Phish 3.0

"Give me a tight, focused 8-minute Ocelot over some whacked out, 27-minute, machine gun Split Open and Melt any day."

agree completely... but I'm sure you'll get flamed for that statement and others - don't let 'em get you down.

RIght there with you Tom, I started in 2009 with the 'Roo Shows and am surely a 3.0 Kid. Looking back now i have seen the band blow away any moments from 2009. The Last concert at Dicks this summer marked my 20th PHISH show and i have been fortunate enough to have shared the experience with some of my closest friends and future wife. I just love the whole damn circus that is the Phish. Nice article and looking forward to reading your next post!

Nice write up Tom! Looking forward to hearing your other Phishy thoughts over the next few weeks

Looking forward to hearing your thoughts about the "other 10%" ... Was Twist ever considered a 'buzz kill'?

Nice write up Tom... try not to get cynical about the fanbase so soon. That's for the jaded vets like Pauly. But seriously many 1.0 fans love Joy. It's a great album that shows a brighter side to a scene that has been plagued with rampant drug use, band breakups, death, and more. I love that album, which I cannot say was my initial opinion of Farmhouse, Round Room, or Undermind. The thing that makes these songs "staples" is time. From what I understand this is a common theme throughout Phishtory. When the songs get into rotation and have a life of their own in a live setting, they become "staples." Welcome to the scene and thanks for your perspective. It could be worse though, you could be a 2.0 noob.