Editor's Note: Our good friend Fink offered to write SPAC reviews for us. I thought he was going to write a final recap when he got back to San Diego, but he sent me this review at 4am. Enjoy!! Cheers, Pauly 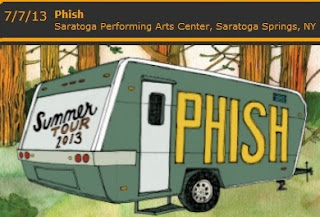 Woke up this morning around 10:00 and watched the final set of the Wimbledon Final (congrats to Andy Murray for ending a drought for England and 28,128 days without a Champion). Lawn Boy indeed. Afterwards, I hit the gym and struggled through a workout, ultimately completing an hour of cardio. Much needed. Not quite the young stallion I once was (or at least thought I was). After the sweat, I eventually ate a burger at Circus Café – it took forever to get our food (45 minutes) but the burger was delicious, they gave us 50% off, and we made some phriends at the table next to us.  I love the random interactions with the phans. We truly are a great, kind, knowledgeable and generally good group the church of phish-goers. Time to hit the show.

Unfortunately, (my friend) Trey and Megan had to go back today. However, this was a good sign that shit was really going to blow up tonight. Sunday + Trey leaving mid run = THROWDOWN. The last time my bud Trey had to leave tour early was on the morning of 8/19/12. To be fair, we were at the end of a 10-day bachelor party for the Wookie and dude takes care of business, but that didn’t stop a group of us from going to the show.  You know what happened next, especially if you were in the house – one of the best Phish sets I have ever seen, one of those that you had to be there for.

We picked up Lisa and Garcia, and Carmine, Wookie, Lauren, Adam, Vanessa and I completed our 8-pack. After cruising Shakedown for a bit, we made our way into the Pavilion. It poured 20 minutes before the show started but we were up in the front of the plane again, dead center 20 rows up.

Fashion Update: Carmine wore a specially designed tie-dye moo-moo based on Fish's moo-moo and big matching glasses and tie dye socks. Adam again came correct with a linen shirt, polka dot handkerchief and bright green pants. The girls all went with shorts and tank tops, I was sporting my "Sunday Funday" shirt.  It will be my go to Sunday shirt for the tour.

Phish isn’t messing around tonight. The first set was one of the best first sets I have ever seen. No shit. I called a Bag opener every show this run (interesting that they opened with it last year's Sunday SPAC show as well); the boys were en fuego right out of the gate. I love Back on the Train and this version was incredible. I can’t wait to go back and give this one a re-listen but they were getting DOWN, we were getting DOWN, Page was outright devouring sandwiches (I still have no idea where that reference comes from – can somebody clue me in?).

Divided Sky showed just how tight the boys were going to be tonight – did they miss a note the entire?  We had a wager going on the length of the pause, setting the over/under at 45 seconds (Editor's note: it was close to 75 seconds). They went well beyond that as Trey kept visually teasing that he was going to start it back up. Again the band was feeding off the crowd, again an incredible response all night by the phans. The dynamic is so important at a show between the band and the crowd and there isn’t an audience anywhere with the enthusiasm of a Phish audience.

Free was nailed – to me one of the most beautiful guitar licks ever written by Trey. And the Its Ice was tight. Mound was executed and a fun song, when the high hat was started, there was no Maze/Bowie debate since Bowie had already been played. Phish crushed it yet another song; it was a DOPE-a-Maze. A good Limb by Limb but standard set up Walls of the Cave to close the set and what a walls it was. Beautifully done, that was top shelf Phish. The first set felt like a second set and will be listened to again and again. Standing ovation Phish, well done. Any questions?

DWD in its standard open up the second set spot was on point. They boys were locked in, super tight and dropping bombs. I suffered a case of Jamnesia (definition below) and forgot what song they were playing.

JAMNESIA  (jam·ne·sia). Noun. 1: A loss of memory in the middle of a Phish jam forgetting what song they are playing. 2. Forgetting post show what songs Phish had played.

I heard teases of Twist and thought for sure we were getting it at some point (especially with a Piper) but it never came as they dropped into Ghost. I cant wait to hear what @LawnMemo has to say about this version, but to me it was truly excellent, beautiful, funky, great Phish. One of my favorite songs, perfectly placed and executed.

Carmine and Lisa have a daughter named Piper and every run I go on with them we get a Piper – just one of those things. Lisa could only do Sunday so the Phish from Vermont saved it for her. Piper is 4 years old and I remember when she was 2 she knew the lyrics to Ghost (but wanted us to fast forward though the jam). You can never teach them too young. Anyway, the Piper was so incredible, it seemed like Trey gave every ounce of himself to that song. Standing ovation, what a start to the second set.

Velvet Sea – like Pauly, not a fan of the song – was a well-earned break for the boys and a good time to take a break for the crowd, hit the bathroom, etc. Run Like a Meatstick was classic Phish – they destroyed with precision one of their go-to songs and of course added some wacky Phish-iness with the lyrics. Meatstick came next – not my favorite tune but appropriate given the Meatlope and a set closing YEM that will immediately jump right to the top of the 3.0 discussions. While YEM is a long song for sometimes a short payoff, the payoff this time was so well worth it. Beautiful, patient, funky, back to patient jamming with a Trey dance, dude has some moves. Top-shelf Phish.

At the encore we didn’t have to huddle about deciding to bail. After this show and this run overall, we were glued to our spots until the end (literally – we eventually left when security started rounding everyone up).

The Loving Cup encore was a perfect, if predictable, closer to an incredible night, start to finish, of one of the most complete shows of Phish I have ever seen. They are at the absolute top of their game; Summer 2013 is going to go down in Phishtory. Phish is next level right now. Who cares about what they did in the past? Enjoy Phish, they are as good as they have ever been RIGHT NOW. We are so lucky to be a part of it.

Post show we were heading out to the lot and a dude randomly comes up to us and gives us 2 of his posters (Wilson was his name) for free! We immediately started hawking them for $20 in front of him. Seriously, this is some some of the best art I have seen for this specific run - I was not much of a fan of what I saw created for this run, including the official prints (especially when compared to last years).

We then walked to the street with barely any hope of finding a cab but one magically appeared. We hopped in with two random girls that Carmine was going to bite and had a mini-dance party on the ride back to the hotel. We grabbed some pizza, Carmine was begging us to go to Twiddle but calmer heads prevailed and we returned to the hotel. I was so stoked from the show tonight I went out to hang solo in the garden area outside the hotel to hang with the people. I started DJing with my Bluetooth stereo and a mini party formed. A live band played for a bit but the group then demanded that I get back to DJing. At one point the pizza delivery guy came to the hotel and went inside. A dude from the party jumped in his car and started doing circles around and around the driveway. Not necessarily cool, but pretty damn funny to the 25 of us hanging outside at the time.

And that concludes my reporting from SPAC. Thanks again to Pauly for the opportunity to share my thoughts with you. It has been fun, however, I am looking forward to the return of our regularly scheduled professional blogging.

Thanks for the recaps Phink! What a fun weekend we had, eh?