Phish is playing 3 sets on Saturday to make up for their clusterfuck on Friday night.

FYI... Phish is webcasting these shows on LivePhish.com.

After the shitshow clusterfuck on Friday, Phish made it up to their faithful minions with three sets on Saturday night, which included a searing middle set that made this jaded vet grin ear to motherfucking ear. Phish took the stage roughly a half hour earlier than usual and the smarmy thugs running the Windy City extended the curfew to 11:30 so Phish could squeeze in a third set to make up for the cancellation of the second set from the previous night.

St. Louis Tom pinged me around 3pm with word from reliable source who conformed a 7:15pm start time. I didn't think the band could get past the powerful machine that runs Chicago with an iron fist. Phish Inc. somehow pulled off three sets, which they could only do with a later curfew. Around 4pm, we got official kangfirmation from the band that they'd be playing three sets (in addition to offering a partial refund). That seemed to quell the mutiny in Phishdom, which was divided between two groups: 1) outraged phans who felts personally slighted by the band and city officials, and 2) Teflon phans that shrugged off the bad beat and hoped Phish would pay it forward sometime in the future. I was in the Teflon crowd, but thought we'd only get 2 sets (albeit much longer sets) so I was thrilled with the announcement for three sets.

My crew was getting soused in the hotel bar and they scrambled to get ready quicker to head to the show a little earlier. We swapped some extra tickets with Fletch. Benjo saw a hottie (with "nice big tits" he added) who was offering to pay $150 for a lawn. Holy fuck. I had not seen such a hot ticket (non-Halloween or NYE) in 3.0 since Hampton. Extras were going for $100+. Not a single floor ticket to be found.

We all had floor tix (with Senor, Benjo, G-Money and Javier) and we posted up FOB. If you were watching the webcast, we were just next to the guy with the inflatable cactus. I somehow found St. Louis Tom even though his phone was dead. Sometimes you're meant to see people at shows (fate vs. technology). 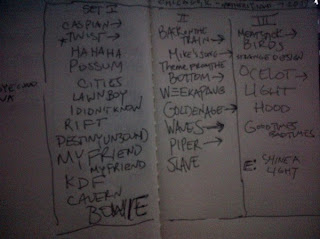 It was almost a given that they were going to open with Prince Caspian. That Twist was topped with some Oye Como Va hot sauce. Ha Ha Ha was unexpected. G-Money and I caught it at the infamous UIC show (played only 6 times in 3.0 and I was a lucky dog to catch four of them). Loved Senor's response to Possum, "This is a new song, right?" I expected Cities and Simple (because both were good songs about big cities like Chicago) this run and Benjo was pumped to hear a Talking Heads cover of Cities. Page dedicated Lawn Boy to everyone on the lawn. He wanted to make them feel a little extra special after Phish Inc. and Live Nation suits pretty much robbed them blind after raking in big bucks selling "lawn seats" which was muddy holes filled with sand and with zero views of the stage. I dig Fish hijinks early in the show (so the vac solo doesn't kill the momentum of a second set) and I Didn't Know was a reminder that we're devoted cult members who worship a chubby guy in a dress playing a household appliance. Maybe all the mind-melting Psychedelic exploration clouded our judgement over the years? Nah, who am I kidding. My biggest regret is that I didn't take more shrooms at Phish shows in the 90s. Rift was quick and painless. Love Destiny Unbound, but its losing its luster as a "bustout" if it's played more than once a tour. My Friend was dark and evil. KDF had a nice mini-jam. Thought Cavern would end the set, so Bowie was all gravy and had some spooky vocals from Fish. Thought first set would be shorter, but glad Phish got through a dry set before the rain arrived.

Javier pounded those souvenir long-stemmed drinks that cost $14! He killed five by the end of the second set (and they were doubles too). We gave him guff that his alcholism is getting in the way of enjoying the Phish. He disappeared at random moments to re-fill his cocktail. I love those edgy moments at a show when you think you lost your friends for good for the night (that they'll never find you), yet somehow they magically re-appear right before a great moment? Well, that kept happening all night long.

The second set was wet wet wet. For a second night in a row, I left my rain gear back at the hotel. Didn't matter. The second set was so good that I danced my way through the raindrops. At the end of Back on the Train, the band had finally turned a corner and the rest of the set was Phish blasting off into the cosmos. Loved the insertion of Theme as the lunch meat for a Mike's Groove sandwich. Glowstick war erupted during Mike's. Weekapaug intro was phat, but the overall version was uneventful. Benjo thought Golden Age had cool Daft Punk lights by CK5. I loved the "blank canvas" behind the band because it allows CK5 to present mood lighting (like the color field school of painters). Golden Age > Waves > Piper > Slave might not sound mind-numbing at home, but it was pure Phish magic if you were dodging raindrops and surfing atop the infectious crowd energy, fueled by 40-minute chunk of bliss. The Deadheads in our crew noted that Waves had many elements to a Dead-like jam. Wished it was played more often. Piper delivered. And Slave? Well, it's my favorite song and I love it so much that I never listen to it. Last time I heard it? MSG run. Perfect way to cap the best set of the run (thus far).

Javier rolled three blunts for three sets. We got stuck surrounded by lots of amateur party people -- sloppy drunks, two feet deep in empty beer cans. One guy was so shithoused that he kept banging into G-Money and Javier. He offered to share a joint, but it was "sad weed" as G-Money put it.

Third set started out slow but then got cooking. Am I the only one who thinks Meatstick is overplayed? Senor loved the Japanese lyrics, which was cool considering we both caught Phish in Japan 14 summers ago. Birds got a quick hook. Strange Design is one of Senor's favorites because back in the 90s, he used to put it on mixtapes for girls he picked up in AOL chat rooms. I wasn't wearing the Ocelot shirt. I love Ocelot even more so because mostly everyone else hates it and it's no longer a first set song, which means the boys think the jam is strong to graduate from the first set. Couldn't stop laughing when a pair of spunout Phishy chicks were rubbing up against G-Money. I was super faded during the Light jam and I was on the ropes, but I got saved by Hood. Trey was in full-blown rockstar-god-wanker mode with Good Times Bad Times. He encore was a soulful cover of the Stones' Shine A Light. Glad Benjo got to see it.

Great second set. The third set had some fantastic moments. Too bad they didn't get a Midnight encore so they could have stretched out a lot of those songs in the second and third sets. I left the show thinking... imagine if Phish came on early every show and trimmed their setlists? They could squeeze in three sets every night.

What a blast tonight. Good to run into Pauly before the show. I knew we would get a Slave after that!

Awesome energy, great show! Got the Mike's Song I wished for.

Insane. We made Phishtory kids.

Best show I have seen in 20 years hands-down. Glad I went--couldn't find ya Pauly!

Thanks for the upoload Rueben.

I have a dumb question why do you guys chose to use hotfile instead of mega where you can get unlimited downloads?

@The Kids Under the Carpet and the Purple Humpedback Whale...

Best show I've been to in the past 20 years

Why are getting the DLs for these shows even a "thing?"

Granted they're "only" mp3s but its highly doubtful that my '99 Subaru (complete with stock tape deck) will care too much.

I'm pretty sure it's like this with EVERY show, right? If you got in legally and still have that ticketstub you're getting that recording--right?