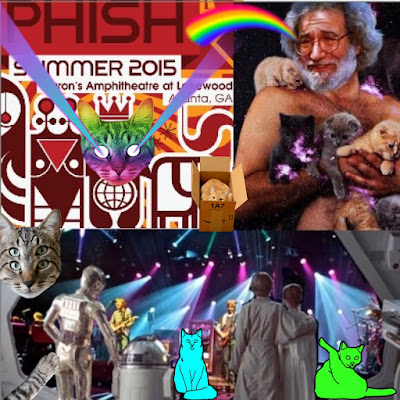 Phish returned to Lakewood for the second night of a two-show run in Atlanta. Friday night was a heater. Let's see if the boys can keep it up on Jerry Garcia's birthday. If there's ever a time for a Dead cover, it's tonight.

The two-show Atlanta run had the best of both worlds: a Friday show with consistent great playing from start to finish, and a Saturday show heavy on risk-taking gambles that fell flat in the first set, yet paid off immensely in the second set. Sure Saturday lacked the consistency of Shoreline/LA/ATL1, but it birthed a monstrous Tweezer that was the highwater (thus far) of the summer tour and easily the craziest Tweezer since the eruption in Tahoe two summers ago... Lights went down at 7:40pm with a run-of-the-mill Runaway Jim opener. First debut of Jim this tour... Rock-star-streamer-Periscoper @lvnphish loved Undermind so much that she had to boogie down! They video was temporarily disabled while she grooved hard to Octo-Fish... Remember the days when Phish always played a country song in the first set so Gordo could channel his inner redneck? Nellie Kane, technically a cover, was only the third cover all summer (aside from Boogie On in Bend and Loving Cup in Dallas)... Blaze On has now appeared at every other show and the fourth time in 8 shows. It's a perfect uppity summery first set tune... Doctor Scotch thought last night's "blue moon" would draw out a Halfway to the Moon appearance. Leo waited until Saturday. The key to digging Moon is the jam out, yet it requires patience because it feels like it takes forever to get there. Every time I hear Moon, I secretly wished Phish busted out Let It Loose instead. Leo slays covers, especially from the Stones... Ocelot crawled out of the jungle for the first time this summer. The deepest jam of the set though it barely scratched the surface... Heavy Things included an Happy birthday tease to Jerry. BTW, Heavy Things is that bouncy summer song that even the super-emo tatty girl barista would nod her head to for a few seconds before returning to the winter of her discontent... Theme from the Bottom still does an impeccable job at taking you on an underwater adventure... Another Hail Mary from Trey with Antelope. Second time this summer felt like Phish was getting blown out at the end of the first set, so Trey scrambled and connected on a bomb of pass to Antelope for a late score to trim the lead going into halftime. Lakewood's Antelope was high-energy but nothing too crazy that capped off a 75-minute set with interesting choices... I understand if you glanced at the setlist on paper and felt skeptical. At this point, it was obviously not optimal song selection, but solid and concise. @pzerbo aptly described as "tight passive"... Set 2 launch time commenced at 9:27pm with Tweezer. First time for Tweezer in a set 2 opener slot since the infamous night in Tahoe (thanks @yemblog). Jam went dark momentarily before it ventured into the land of blissful Mutrony bubbles. 26-minute Tweezer? It delivered.

I needed a cold shower after that sticky-sweaty orgy. Tweezer ascent to the summit set itself among the jams of the summer with Bend Simple, Shoreline Twist (really Blaze On>Twist>Light), Dallas Hood, and ATL1's totem KDF... Waiting All Night could be a snoozer, but that slow tune was a welcome respite after that insane Tweezer which was so bombastic that FIsh was reaching for the oxygen tank. Everyone needed a breath or two to get their space together when you travel that much difference in a short span... Backwards was a Pauly Smokes A Bowl Song, which I needed before shit got fucking bananas. I'll say this: not a fan, but the LA Backwards and ATL2 Backwards were indeed a group effort. Transformation. Those used to be completely "phoned in" from the rest of the band while Trey wanked and waxed nostalgically... Carini popped up again. If Tweezer was like surviving a major earthquake, then Carini was its largest aftershock. That deviant fucking heart-stomper. Like every girl who broke my heart. Unlike the condensed version in LA, this Carini was a fierce fucking beast. Didn't waste any time either before it went sideways, like that rogue girl in your Catholic HS who would sneak into the confessional to diddle herself while taking key bumps of Xanax. Faded-bad-girl-in-plaid-jam... Waste gave Fishman another moment to catch his breath. You can't fully appreciate peaks without valleys.

Saturday Night SAND Dance Party. Twerk City, USA... Tweeprise Twerkprise closed the set and they didn't save it until the encore, nah, they unleashed it as the set closer... The encore was not a Dead song (in honor of Jerry Day), but a cover of Velvet Underground's Rock and Roll. Lou Reed fist-bump-approved...  It was going to be tough to top Friday night's "Phish Destroys Atlanta" show and the band sort of conceded that right away with an odd start and first set theme that resembled something akin to "Let's play the exact opposite of what the crowd wants right now!" The second set included a pair of  jagged, mountainous peaks (Tweezer and Carini) that stood out among a landscape full of serene mellow moments. The boys harnessed the Hotlanta heat for a second night in a row. Atlanta run dunzo. Eight shows in the bag overall. Alabama is on high alert. Hide your daughters. Lock your medicine cabinet. The psychedelic circus is headed your way. Next stop Tuscaloosa.

dude. so fast. what a set of some epic jams again. so good. appreciate it.

Thanks for review Pauly. One (minor) correction, they played Loving Cup in Texas, so Nelly Kane is at least the 3rd cover. But, you are right to note that covers have basically gone away. Two last night though. I'm hoping Golden Age makes a come back, and of course, Cross-Eyed. Two jam vehicles that are missed.

Thanks for correction Chris!

Thanks for the droids and reviews and updates and everything, guys! Love the blog, the tweets, and the vibe!