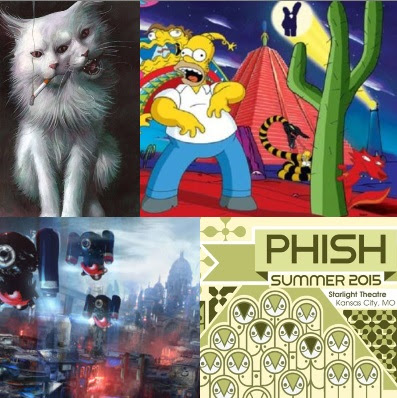 Phish returned to KC for a gig at the historic Starlight Theatre in Kansas City, Missouri.

Return to the castle. Cue the Zelda theme... Lights down at 8:05pm with a Gumbo opener. Now that's what I call a fucking opener. First Gumbo this tour, short and sweet but one of the highlights of the set... Nothing could compare to the previous KDF, but this shortie did not deviate from the path... BBQ funk with Back on the Train... That Bouncin' was the obligatory piss song.. Loved the one "screamer" during Divided Sky. Sweet Jesus that girl had pipes... New song with the debut of Last Step, which got called up from the minors and Gordo's farm team... Blaze On is in every other show rotation (swapping off with No Man's Land) and stepped into the role of "peppy new song white people who smoke pot dance to badly." This was the first time Trey introduced a "Play it, Leo!"... Waiting All Night is growing on me (can you sense the moistness of the dripping sarcasm there?). @LawnMemo pointed out the poignant guitar solo is Trey crying his eyes out over a lost love. Dude, Memo give me a call and I'll set up a meeting because we can make millions writing LIFETIME MOVIE OF THE WEEK scripts about a newly-divorced rock-star dad with two kids who seeks true love on the tumultuous touring road filled with temptations at every turn... I've been whining for a Melt since Bend. Knew it wasn't going to happen in KC, but thought it might be an Antelope-high-gear night. Nope. Instead a nonchalant 46 Days closed out the 70-minutes set... Gotta Jibboo kicked off the peppy set two and started to take flight but they pulled it back in... The Bud-Lime-lubricated shitstains were already juiced up and wooing like frat-daddy-banshees before Trey could finish the opening lick to Twist. Quickie Twist... Wedge got little extra hot sauce, but everything up until that point was foreplay... Deep-spacing Dirk Diggler porn-thrasing DWD with oodles of celestial 70's classic rock teases including Under Pressure and Jumping Jack Flash... DWD > Sand. Yup it happened...

Until the droids are ready....check this out:

What's up with the Trey divorce comments? People always joke about it, but he and Sue still seem happily married. Do you know something we don't?

I was super tired last night and had to get to work early...still looking for droids...http://we.tl/QH54cx27kM

You the man, Phaser!

Thanks Phaser! Since I can't make any shows this tour you've eased the pain. Thanks again man!

Thank you much, Phaser!