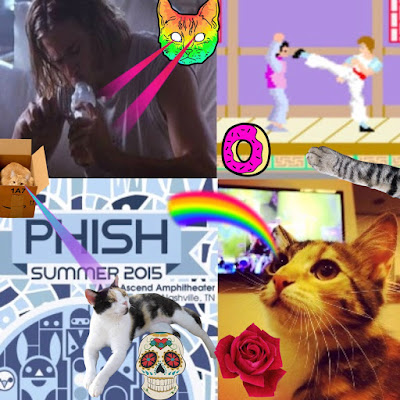 Phish returned to historic Nashville for a one-nighter at a brand spanking new venue. This show will be webcast over at LivePhish. 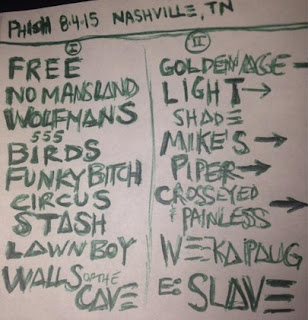 Welcome to Nashvegas, y'all! Phish was the second-ever act at this new venue. Still had the new venue smell until Phishkids took over and dank'd up the joint. Hope the overall wookery was kept to a minimum so we get invited back... 7:35pm lights went down. Free openers are always a good omen... No Man's Land another edition of Southern-fried funk... Wolfman's in third spot. 10-minute version highlighted by a compact jam that was one spicy eggroll. Minimalist jam at the onset before Trey had another intimate face-to-face moment with Gordo. Only few minutes into Wolfman's Trey got so sweaty that he took his hoodie off and the crowd applauded. Not quite an Emperor wearing no clothes moment... Gordo put 555 on hold in Bama for a MEAT bustout, but he couldn't resist. I figured we were going to get one of two things: 1) Dolly Parton sit-in on "Nine to Five", or 2) 555. Yup, you can kiss the Dolly Boobies sit-in goodbye. I didn't have to piss so I fixed my trash disposal during 555. Girlfriend was thrilled when she got home from work. #PaulyPlumbingSong... Birds (with They Attack sample) was short and sweet but Big Red switched guitars for a tune (before he returned to the Ocedoc)... Finally the first Funky Bitch of the summer. Funky Bitch achieved everything awesome 555 failed to... Circus was another tour debut and another cover. We got back-to-back covers, which does not happen very often (aside Halloween). That was the first batch of covers (we'd get four overall)... Short and sweet Stash. I miss the long, deep, dark, and nasty Stashes. Ex-wife hated Stash. It was her bathroom song. Reason #216 she's my ex-wife... Lawn Boy time. Leo wandered over to "Mike's side!" and like a Viking raiding party pillaging and plundering seaside towns, Leo snatched up some of Gordo's rail tail by his mere presence. Trey referred to Leo as the "Chairman of the Boards" for his Sinatra-like suave with the ladies... Post-Lawn Boy coital bliss seemed like an appropriate moment to bring a heater closer (Julius, Zero, Suzy) but instead Walls of the Cave closed out the set with "The Chairman" intro by Trey. Walls was one of my favorite moments in LA, but Nashville's Walls jam out was cut close due to time constraints. Still, how could you complain with almost an 80-minute opening set?... Lights down at 9:23pm... Set 2 opener Golden Age came out of nowhere. Another cover and another tour debut. We caught it three-times on the West Coast last fall and Vegas was the last time played... Good pickup by Doctor Scotch who texted me "Light is coming!" multiple times during the entire Golden jam out. Gaunt Light was stiflingly mediocre compared to its more athletic siblings. Little do we know it was only a set up for something juicy later in the set. For a second, thought Page was gonna throw down a Taste out of Light... Instead Trey dragged everyone into his emo world with Shade. "Trey's divorce song again. It's sadder than dad rock!" explained @Change100... After a quick huddle, Phish went into the shotgun and threw a bomb with Mike's Song. Had no idea what to expect in the middle lunch meat -- we had some fantastic Simples already this summer but they busted out Hydrogen the other night. My girlfriend thought a random cover was coming. 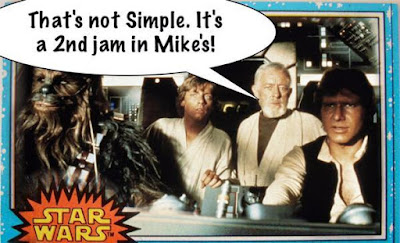 For a moment, we got a Simple fakeout. Juked. Deked. Faked. Trey pulled a fast one on us and the entire band submerged for a second jam out. Yes, a second Mike's jam. The collective hive mind in Phishdom had an orgasm that exploded their fucking skulls. Thanks to @DrewPhish for the persistence... The Mikes II jam eventually fizzled out into Piper, which finally popped out of the oven after a premature misfire in Bama. That worm got shoved back in the over for a couple of days and was finally queefed out into the world as part of the Mike's Groove lunch meat buffet... @BrainFeller actually called a Crosseyed earlier in the set when he caught Trey telling Page that Crosseyed was on deck. Alas, it finally reared its head in the middle of Mike's Groove. We love it when Fish sings. Crosseyed and Painless was another bustout cover and the fourth of the night. I owe Trey a kick in the nuts for ripcording Crosseyed... Weekapaug kept getting better and better and eventually went sideways and even a heavy-heavy metal bromance. I had one of those moments when I forgot what song was being played. Always a good sign of Phish magic. I fell deep into a minor flashback and got all sweaty. Sometimes you can be totally sober and Phish hits a certain note that instantly zaps you back -- Phish time travel -- to a moment when I was totally shellacked. Could I drop a pin somewhere in this jam and would someone pick me up? Can UberX work in wormholes? Will they pick me up in a flashback? Had to catch my breath for a moment after that intrepid glitch in the matrix. Finally pulled out of the fog just in time for the Weekapaug denouement with ominous whispers of "still waiting"... Slave encore. You know Phish thinks it was a good night when they cap it off with Slave. I caught 4 out of the last 5 Slave encores (2 at MSG, 1 in Vegas, and the other at Blossom) and missed the OKC Zoo Slave... Another wild night with Phish. You never know what could happen on any given night. Like the return to the days of yore and Ye Olde Mike's Second Jam in a Mike's Groove that had a juicy filling stuffed with Piper and Crosseyed... Ten shows in the books. Phish's southern swing is over. The circus migrates to Kansas City tomorrow night before hitting up the Midwest this weekend.

I still can't find those droids...http://we.tl/itJ3BouIc9

you are not lazy lightning. instead, you are regular lightning.

Thanks, Phaser! Best Couch Tour ever!

thank you phaser for all you do to find those damn droids :)

I still can't get over this great place I recently visited! This isn't only a good place. It is also one of the best around here. There isn't a listing of the unique offerings, although there should be! The party venues Houston TX were magnificent!