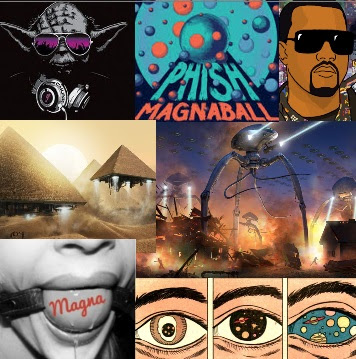 The final day of Magna Ball. Let it all hang out.

MagnaBall is webcast by LivePhish.com, but tune into Sirius XM radio or The Bunny for a simulcast.

Never miss a Sunday show. Here's what you missed...

Never miss a Sunday show. The cult of Phish. We worship our gods with relentless blind faith. Booked bets on Dinner and a Movie opener (after last night's Drive-In set). Glad D&M didn't come in. Instead we got a threadbare PYITE opener... Another serious bustout this weekend with Buffalo Bill... Strong 2.0 tune with A Song I Heard the Ocean Sing. The boys killed 2.0 tunes this summer... Limb by Limb display of Fish the Octopus... Waiting All Night is like the wrinkly, pathetic pickle on side of your plate that you give a sympathy bite... Theme some serious Page power lifting. Might have to test him for PEDs... Sometimes it's like all four guys are gambling on a Maze sprint by trying to find out who can't keep up. Page was the Usain Bolt of MagnaBall. Leo blew them away. Leo the human flamethrower with scorched Earth during Maze. Thought he could break one of his keyboards he was pecking so hard... The Line. Fitting. A song about blowing a huge moment... Stash is mellower in its old age (post-rehab and after three divorces), but sneaky and deviant as per usual. Had a I Know You Rider and Manteca tease... Reba super mellow... Trey referred to Fish as the "lil beast." I Didn't Know featured an extended Fish vac solo ("suck some love") while Trey yapped nonstop thanking pretty much everyone on their staff. Dickie Scotland got a shout out... Zero closed out the 95-minute set... Another quickie setbreak... 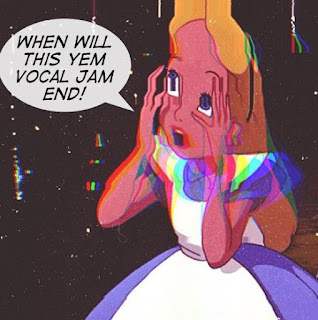 Set 2 blasted off with celestial-funk vehicle Martian Monster. Just a heads-up for all the spacekids looking for a ride to Dicks... Even the noobiest of the noobsteins expected DWD to open up the final set. Alas, DWD still took on the role as the rocket launcher. Bending deep space again. Got so far out that they never finished it up. Hit the 15-min mark when I heard the licks to Scents... Sure enough  Scents and Subtle Sounds popped up sans intro... Bled into one of the softest versions of What's the Use I ever heard... Dirt almost felt redundant (right after WTU), but I could hear Dirt at every show. It was just an opportunity for Fish to take a much-needed breath before they all made an ascent atop Mount Mike's Groove... Mike's Song lacked the so-called second jam, but it still delivered all the booty-shaking, bong-rattling, echo-heavy goods... Fuego lunch meat with a little extra hot sauce... Twist had more Trey-Gordo sexual tension with a cuckold Page in a dark corner leering on with those eyes swimming in melancholy. Twist went 2/4 time for a few bars before Fish teased Immigrant Song... Weekapaug intro had a few leftover Fishman Immigrant wails... Shocked everyone by returning to Martian the Monster with Fishman vocal wookery and Trey falling into an echo-hole... Encore was YEM. Holyfuckballs. Godzilla himself trudged out of the sea and opened up a twelve-pack of eyeball-melting whoop ass. YEM? That's how you end a show. That's how you end a run. That's how you end a festival. YEM, thank you Phish... Set 1 standouts included Maze, Reba, and the Buffalo Bill bustout. Set 2 was anchored by DWD but the entire set snowballed into an eventual avalanche from Martian Monster start to Martian Monster finish. Plus that YEM was the proverbial whiskey-soaked cherry on top of the MagnaBall sundae... Third night dunzo. This portion of summer tour is in the books. See ya in the lot for Dicks!

Thank you. Great weekend of music!

These are NOT the droids your looking for...