Skip to main content
Labels
Posted by the joker March 03, 2008

The Road to Langerado: R.E.M. refresher 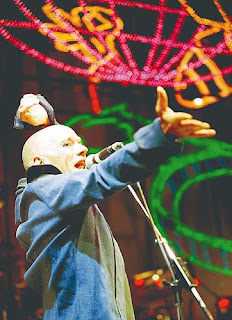 Today is Monday and all I can think about is how I am getting on a plane on Wednesday to go to South Florida for a few days to see some great great friends and party at Langerado. As you know, R.E.M. is headlining and I thought that I would refresh my (and your) memory. I can't say that I have listened to R.E.M. very much lately or that they are on the top of the list of artists that I would have called to headline a festival, but at the same time they have some pretty good songs (for me to listen to and get some rest before the late night shows).

The last time I saw R.E.M. was in 1999 in San Antonio, TX. Wilco opened for them and I was more excited at the time about seeing Wilco. San Antonio does not get a lot of shows and that night it was out at some sort of polo fields/racetrack. The security was VERY light that evening and not only did I sneak into the show, I also was able to sneak back stage. When I say sneak, I really mean that I just walked through an open gate. I am smooth, but I am no Jason Bourne or anything.

Back stage there was a line of radio station contest winners waiting to meet R.E.M. They all had excited looks on their faces and handfuls of pictures to get signed. I simply walked up and stood in line. A few minutes later Michael Stipe and Mike Mills walked out and greeted us. I can't say that I was starstruck or in awe or anything, but it was cool to shake hands with them and look Michael Stipe in the eyeliner.

After I shook hands with R.E.M. I noticed that Jeff Tweedy (Wilco) was standing a few feet away watching the crowd swarming R.E.M. and smoking a cigarette by himself. I had seen Wilco perform the previous night in a tiny club in Austin called Antone's. Wilco changed their name to "Summerteeth" so it was a "secret" show. To this day it is still one of the loudest rock shows I have ever been to. Wilco also played 5 encores that night because the owner of the club kept coming out and getting the crowd to scream again and get them back on stage.

I approached Jeff and told him that I enjoyed the Antone's show. He perked up and we chatted for a few minutes about the tour. I kept it brief and it was all around a cool conversation.

If you are heading to Langerado I hope that we will run into each other...check out some of R.E.M.'s finest...