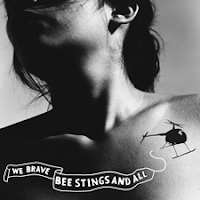 OK, from time to time I have to admit to myself that I am - indeed - white. And with that comes the things that white people like. #41 on that list is indie music. Thao Nguyen (not white) and her band, The Get Down Stay Down (white), released their album We Brave Bee Stings and All on Elliott Smith's old label Kill Rock Stars about two months ago. I fell in love with the album cover and the second track, Bag of Hammers. It has been gnawing at my brain/inner ear for the past week, which I suppose is better than a bag of dicks doing the same. It took me some time to find the album for download - I went through about 5 different bunk links before finding a link via some Japanese website that did the trick. It paid off. Though, I did hop on the Kill Rock Stars website and buy the album along with a T-shirt - they have a special for the combo at only $13 and change.

Sounds like: Elliott Smith, but happier and lighter. Belle & Sebastian with maybe Cat Power singing (and in a really good mood). Some tracks swing, some are stripped down, but it's all well layered throughout. Whatever, check it out.