I went to college in Atlanta so it's a city where I partied down. Hard. Too hard. I dunno if it was me trying to re-live old glory days, or the festive atmosphere of the G-Vegas crew. Probably both. Anyway, I had one of those fun Saturday nights when I got hammered with friends. Phish was the added bonus.

You know traffic is bad when a denizen of Los Angeles complains about it. But shit... traffic in Atlanta is atrocious. Originally, we planned on taking two vehicles for the eight of us. But Otis busted out the Moscow Mules. 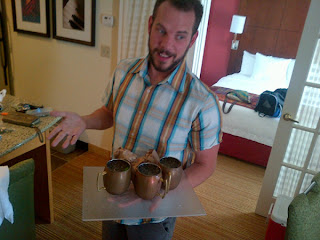 The liquor flowed and no one was in shape to drive. Uncle Ted pulled two clutch moves... 1) picking up a shit-ton of BBQ for the pre-party and after-show, and 2) arranging a van to drive us to the venue on short notice. Our ride was late and somehow the front desk lady hooked us up with a driver. We were staying at one of the airport hotels so we were less than five miles to the venue. We piled into the van and our driver took us in the back way. He dumped us off at a gas station that was steps away from the entrance to Lakewood. We tipped him well and he (supposedly) agreed to pick us up after the show.

We arrived kinda late and barely had time for the lots. I was running out of juice on my phone and already shrooming. Most of the other people I wanted to meat were scattered about or stuck in traffic. We headed inside and found our seats on the far left. Page side. Rage side. Me and DiscoSister #1. She got her drinky-drinky on pretty good. We had a decent section, not too many talkers, with the exception of wasted redneck guy who offered me a fistful of mushrooms. I politely declined. I had already ingested my own and felt perfectly snookered. Besides, he was just too sketchy for my tastes.

The security guard tending our station was having a tough time handling all the kids trying to sneak into the pavilion.

"Y'all bitches are crazy and the show hasn't even started yet," she bemoaned. "But I tell you what, I ain't getting out of here without scoring me some weed. Daaaaaaaaaaaaaaamn. You crackers smoke some good shit."

I had not seen a show at Lakewood since 1999. That epic July 4th show is among one of my favorite shows from that summer tour. The last couple of years, the action shifted to the burbs of Alpharetta, but the boys returned to where it all began. At least for me.

Phish kicked off the Atlanta show with Cars Trucks Buses. I was chasing it during the first leg. It flowed smoothly. Almost felt like a laid-back sound check. Page set the tone for the night with some delicious playing. I almost felt as though CTB and the subsequent Wolfman's were the highlights of the set. Unusual that the first two offerings of a set would be the highwater marks.

The crowd began clapping (out-of-tune) during Jim, which annoyed the hell out of Disco Sis.

"You know what I hate during shows?" said Disco Sis. "Drunk assholes clapping during Jim!"

I dig all the "play it Leo" songs, especially Ya Mar because you get some Gordo slap-funk reggae and a breezy Page solo. I liked the speedy My Soul. Felt like it was much faster than usual. Disco Sis dug it. She said her face hurt so much from smiling too hard. The meaty parts of the second half of the set included a raucous Wilson and tripped-out Maze. I didn't get too lost during that jam...not that they didn't try to dig some deep tunnels toward Middle Earth before burrowing out. Roses was rocking but standard and Phish left the stage riding a surging wave of energy after a rowdy Character Zero.

I found @TourTweet at setbreak. He gave me a nice gift of Asheville's phinest. Seemed like a short setbreak. Heck, both sets seemed short. I forgot about the 11pm curfew. The band didn't really have much time to waste with 20-minute long meandering jams.

Kill Devil Falls kicked off set two. The wasted redneck in front of us started banging on the backs of the seats in front of him. At one point I thought he was gonna rip the seats out and start humping it.

The jam out of Golden Age was one of the highlights of the show for me. Uber-trippy jam. Gordo was back on the juice for that Golden jam, which CK5 was lighting using lots of purple hues. I really have to re-listen to the part of the show that included Golden Age > Free > Light. I fell into a shroom hole during Light and was in my own world. The lights displayed on the circular screens above the band during Light reminded me of crystals and peyote buttons.

I sat down to smoke a bowl during Velvet Sea, or Velvet Dick Cheese as Disco Sis referred to it. Toward the end I started singing the chorus very loudly. Apparently I interrupted Disco Sis having a tender moment watching parts of the crowd. She was lost in her own space... but she yelled at me for ruining the song with my Bob Dylan-esque falsettos.

"You're such a fucking jaded vet!"

Chalkdust > What's the Use was my other favorite segment of the show. Supposedly, that was Chalkdust #400. I must've seen about 70 of them, but this version will stand out because of the cosmic-jam out. You know a Phish song is getting far out when you forget what song they are playing after getting totally lost in the jam. In than instance, they dragged us all the way out to Pluto than bailed. Leaving us to fend for ourselves on the fringe of our solar system.

What's the Use was the perfect song for my mindset. Shroom tunes. Couldn't have asked for anything else.

"Beam me the fuck up!" screeched Disco Sis.

The best part of Joy were the wooks behind us smoking DMT. Joy Deemsters? I think I found a clever name for a fantasy football team. Joy Deemsters.

So I've caught both shows when Phish served up Velvet Cheese-Joy. Oh well. I could totally understand if you were pissed off because this was the only show you're seeing this summer. The band could've used those minutes to keep on jamming out that twisted Chalkdust Jam or extended the sparkly Light jam.

The set ended with a searing Antelope. Although it never deviated from the main road, it was still lots of high energy.

Page capped off the evening with a Beatles cover... A Day in the Life. I thought they might toss a Little Feat cover in there, but instead, the band paid homage the the Fab Four.

We wandered outside and met up with our group. All of us survived the show. We found our "driver" but he totally fucked us over and said he had other clients. What a dick. I'm pissed that Otis tipped him a few extra bucks and that generosity was not enough. Oh well. G-Rob scrambled and within a few minutes he bribed a guy with a van to cart the eight of us back to our hotel. Behold the power of a $100 bill.

The after-party was short but a lot of fun. G-Rob was cranking Dead, Talking Heads, and Snoop Dog. I made a controversial assertion that I identified more with Snoop Dog's lyrics than Dylan's 60s poetry. Uncle Ted was in rare form and made these chicken-like figures out of hand towels. He also fell into a character and couldn't get out. He was living in 2085 and was conducting a business meeting for his Chicken Salad empire.

Yeah... another Phish show in the books. I had fun, as per usual. I got wasted with friends and we all had a blast. Could they have played better songs? Sure, but that's why you go see multiple Phish shows... you never know what you're gonna get.

Five shows done this leg... five more to go. See ya in Charlotte.