Charlotte Recap: The Church of Phish

Never miss a Sunday Phish show. That's an adage I heard a couple of times. Last Sunday was a scorcher in San Francisco, which bolstered that assertion. It goes without saying that any day that Phish plays is our day of worship. For us devoted apostles, Phish is our religion and Trey is the Pope that shits in the woods.

"Never miss a Charlotte show in 3.0," Disco Sis said. She luckily caught all three gems. I saw 2010 and 2012. For some mysterious reason, Phish steps up their game in Charlotte. Add the fact it was Sunday... and you have a recipe for some finger-licking-fried Phish. What other band on the planet has molly-eating soccer moms ditching their kids for the weekend to throw down hard? 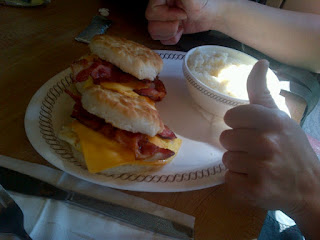 We woke up foggy and groggy in Atlanta after Phish's return to Lakewood. Disco Sis shook off her hangover and took on the burden of getting us to Charlotte safely. After a quick stop at Waffle House for bacon biscuits we zipped up to North Carolina. I love seeing other vehicles on the road that are also going to the next show and feel some sort of camaraderie with my fellow road warriors evading good ole Smokey and other humorless, hippie-hating highway patrolmen. To hell with the fuzz. Never miss a Charlotte show.

We checked into a sketchy motel a couple miles from the venue and opted for some rest instead of heading to the lots early and sweating our arses off. We arrived around 6pm, which gave us an hour of raging in the lot and watching the scene unfold at Shakedown. We linked up with some of the G-Vegas crew including M, who was having her first-ever Phishy experience. She picked one hell of a night to see her first Phish concert. Never miss a Charlotte show.

Just off Shakedown, a spun-out wook told me his sad story about getting his merch confiscated by copyright police. He offered me an old-school pressed roll. Shades of 1.0. It looked like a yellow sun and popped it in my mouth, washing it down with some iced tea.

We got to our seats in the pac a few minutes before showtime and shooed away a couple of feral kids trying to squat on our seats. Disco Sis and I were on Page Side Rage Side again. Two nights in a row.

Standard AC/DC Bag opener. I got a good vibe that the Charlotte show was going to have a "bite to it" when the crowd erupted for the "let's get this show on the road" bit. A dose of Carolina- pulled-pork-funk was served up for Moma Dance. I did a spit take when Disco Sis leaned over and blurted out, "Heavy Things reminds me of a washing machine." For me, Heavy Things conjures up images of Big Cypress and the "cheesecake" chant at the Millennium show.

Ocelot batted clean up, and yes, I wore my beloved Ocelot lot-shirt for the first time this tour (my sixth show). Although Trey is wanking off for most of the jam, Page was the true MVP of this rendition. The apex of the faded-oxy jam was lathered in hot sauce.

Behold the Cactus Juice. Gordo flexed some of his bulging guns during Funky Bitch. Gordo's been roiding ever since he hung out with Melky Cabrerra in San Francisco. Funky Bitch flirting with "overplayed" territory... but I'm afraid to snark on it via Twitter or Gordo and his meathead friends at the gym will beat the shit out of me.

The crowd lapped up every note of Gin. I always miss the Joker the most whenever Phish plays that song. I'll be reunited with my tour buddy in Denver... which can't come any sooner. Phish almost let the slippery Gin jam slip through their fingers, but they snatched it before it snuck away. 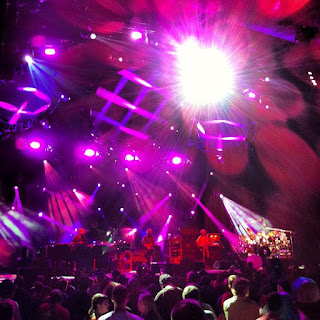 Courtesy of @Phish_FTR
One of the loudest crowd reactions of the night happened at the start of Fluffhead. I almost ruptured an eardrum during the "powerful pill... oh yeaaaaaaaaaaaaaaah" part. The guy next to me was a veteran of 97 tour but doesn't get to see too many shows anymore, so he went berserk for Alumni Blues > Letter to Jimmy Page > Alumni Blues.

After the end of the song, Trey and the rest of the band engaged in some nifty stage banter. It even featured a rare response from Gordo. Yeah... Gordo actually spoke during a show. The roids altered Gordo's personality!

Anyway... Trey told a story about meeting Fish at the University of Vermont in 1983 and the two were kicked out their freshman year. Fish posted the "lowest grade point average for a non-fraternity student" with a 0.0036. Page attended neraby Goddard College and got cash kick backs ($50/student) for recruiting new students, so he made a quick $100 by getting Trey and Fish to enroll. Fish made a crack that uber-smart Gordo had a "4.12 (GPA) in film and engineering."

The banter reminded me of the Asheville show in 2009 when Trey launched into a "Storytellers" type conversation about being Fish's roommate and thumbing through his journal... which inspired several tunes including two of my all-time favorites: Tube and Gumbo.

Anyway, we got a quick Tube before the banter returned with My Sweet One. Fish was reluctant to give some background on the song and the rest of the band needled him. At one point Page issued an ultimatum... "Start the song or tell the fucking story."

Phish was having fun onstage. They were joking around and poking fun at each other and having a blast. When they have fun... we have fun. It's pretty simple. The band and audience feed off each other in an incestuous, twisted relationship. One of the primary reasons why Charlotte stood out was the fact that the band was in a jovial mood and very loose. That vibe spilled over into the crowd. I just hope the boys realize how much fun they have together and decide to play 60 or more shows in 2013. Heck, why not 90?

Phish's gimmick next year will be playing Possum at every show just to fuck with all of the jaded vets, Sabremetric geeks, and everyone else who showed up to find salvation and redemption at the Church of Phish. Did you know St. Leo is the patron saint of wooks?

Okay... sorry for the tangent. Anyway... after Trey finished reminiscing about the halcyon days of Phish lore, they capped off the set with Bowie. Highly contagious bundles of energy, albeit rushed a tad.

I love Crosseyed and Painless. I chased it back in the late 90s when I was a hardcore tour rat. Two versions I saw stand out from the end of 1.0... Big Cypress and Deer Creek 2000. The Joker and I caught Crosseyed only one of the two times they played it in 2.0 at Deer Creek in 2004. In the 3.0 era, I've been spoiled... 14 out of 18. Call it dumb luck that I've been blessed with the opportunity to hear a Talking Heads cover I was jonesin' like crazy to see it the most in 1.0. I caught a couple super-duper renditions this year alone... all three kicked off the second set (Bader Field, the night I tripped my balls off at Alpine Valley, and last Sunday in San Francisco).

Phish anchored the second set of Charlotte around Crosseyed and Painless's relentless surging waves of Latin-funk grooves peppered the first half of the jam before it took a quick turn down a seedy alley and ended up in evil jams territory.

McGrupp was mellow, yet intense at times, but it was a perfect setup for Mike's Song. Gordo flexed his muscles once again courtesy of the Cactus Juice. Bouncin' was a Disco Sis Takes a Piss Song. I knew the lines would be packed during Bouncin so I waited... even though I had to pee since Ocelot began. When I finally relieved myself after the show, I urinated longer than Sunday's version of Tube.

Whatever energy that was sucked out with Bouncin quickly returned with a turbo-charged, roaring Axilla. And then things got weird with Tweezer. You know Phish ain't fucking around when they sneak a Tweezer and Mike's Song into the same set that also included an almost-overlooked Harry Hood. The boys usually spread out their heavy hitters over a couple of shows... but in this instance, Trey was not shy to load up on the big guns.

For some odd reason, the Frisco Tweeze rubbed me the wrong way last weekend. It felt slightly off. However, the Charlotte Tweeze won me over. When Page seized control of the jam, I got that "underwater" vibe which you feel during the jam out of Theme from the Bottom. I thought this Tweezer was going to veer off into Ghost, but instead, they opted for a Hood, much to the delight of the crowd. Horse > Silent got squeeze in before concluding the Mike's Groove with a quickie Weekapaug. But wait... there was more.... a soulful and uppity Suzy ended the set.

I was praying for anything except a cheesed out "Show of Life" for the encore. I got what I wanted even though Phish threw us an insane curveball with a loud and rowdy Big Black Furry Creatures From Mars. The hijinks returned when Trey played guitar behind his back and Gordo got down on his knees and slapped the shit out of his bass. Disco Sis went ape shit because she had never seen BBFCFM and figured she'd never get to see it. Yep, never miss a Charlotte show.

The Trey wank-o-meter was off the charts for Tweezer Reprise, but it was a definitive exclamation point for the evening. After the show, we headed to the lots and made a beeline for Shakedown. We soaked up the festive bazaar of weirdness. Somewhere in the shadows of Shakedown, I nearly tripped over a leashless tour puppy while fireworks exploded in the skies every few seconds. Another fun night. Another monumental Sunday Phish show. Another epic night in Charlotte.

The Southern swing is dunzo. The circus migrates to St. Louis on Tuesday before heading to Oklahoma on Wednesday and closing out the tour in Colorado for a three-night rager. I caught six shows thus far... and have four more to go. See ya in the lot in St. Louis.

I have to say "never miss a Sunday Phish show" was an adage that was borrowed from the GD. Sunday sermons were a regularity that often saw "Samson and Delilah" open set II