I love it when Phish goes off on a tangent and makes something from nothing. That's why I chase them all over the country and prefer those four or five-song sets because it gives the band lots of wiggle room to maneuver and take chances with monster jams. These days, they do not devote large chunks of their sets to ambitious improvisational exploration. Instead they give you mini-jams somewhere in the twelve minute range with the occasional foray into twenty minute territory (e.g. Long Beach's Rock and Roll). But even within those constraints, Phish delivered a show that kept phans from all eras on their toes including a marvelous Limb by Limb that everyone's been gushing about.

Every once in a while, Phish absolutely obliterates a song and that particular show becomes synonymous with said song. Take Long Beach for instance... just mention those two words and you instantly think about that sickly Rock and Roll. Or how about that Gorge show from last summer? I can't tell you anything other than that Roggae , which came out of nowhere. Justin Ward said it was the best Roggae ever, and I concur.

Well, if you were one of the ten thousand lucky souls in St. Louis, then you bore witness to a magnificent version of Limb by Limb. The evening will forever go down in history as the St. Louis Limb show.

St. Louis was special from the get-go. The crowd was lit up (courtesy of a raging lot scene) and the entire venue was buzzing with kinetic energy before the band took the stage. They also feed off of the sea of Phisheads in front of them. In this instance, the band had a little something to prove. Depending on who you talk to, the last show in St. Louis at the Fox Theatre was a bit of a let down. Besides, Phish has only played in St. Louis one time since their return. Phans from all over Missouri and the Midwest flocked to the banks of the Mississippi.

With the exception of Ocelot (the only 3.0 song played in the set), the first set was full of old-school delights that would tickle the soul of even the most cantankerous, jaded vets in the building. I was digging every second of the set including rarities like Mound and The Curtain minus the With. Usually I cringe when the boys butcher parts of beloved songs, but I didn't mind the flubs and was thrilled to death when Trey actually nailed a few complicated segments. 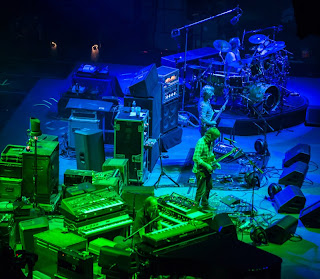 Photo via Dave Vann courtesy Phish's FB page
The room was anticipating PYITE opener. It was one of the few heavy hitters that had yet to be played during Leg 2. Sometimes openers are throw-aways or often phoned in while the band get used to their surroundings, but not this instance. Despite a few errs, you could feel the overflow of crowd energy... and it's hard not to deliver when the band has an endless pool of energy to feed off of.

I have personal reasons why I identify with Ocelot, a song about Trey's struggle with pills. But the last few versions I caught had a little extra hot sauce sprinkled on the end. They always start out slow and funky and slowly and sort with a cool-breezy jam building up to an orgasmic peak. Hey, Phish must really dig Ocelot if they played it two shows in a row.

Reba was a powerful fourth song and a venerable "clean-up hitter" to use baseball parlance. When constructing a lineup, a manager always wants to have his strongest hitter in the clean-up spot.

I Didn't Know was one of those rare non-Tom Marshall songs. IDK is an old-old "Nancy" songs. We got some Fishman hijinks early on with a modal-scales influence vacuum solo. After all, Trey called Fish the "John Coltrane of the vacuum cleaner."

Peaches is the only Frank Zappa tune in rotation and I have mixed emotions about the song... I wish they played it more, but sometimes they struggle with the song, so it comes down to this... do you want to hear a flawless song you don't like, or would you hear a favorite song that the band absolutely butchers? It's a catch-22. You can't get better at a tune unless you keep playing it. In this instance, we got a crisp Peaches, which was followed up by another tune from my college days -- Mound. The band dug a little deep into their bag of tricks and opted to entertain the crowd with several older songs instead of cranking out a buffet of greatest hits.

But... the band never let the audience get too lackadaisical and launched into a crowd-pleasing Sample in a Jar. From that moment, the rest of the set was all heat... a boisterous The Sloth, a funkified Camelwalk, a brisk Possum, and capped off with a peppy Quinn the Eskimo that got everyone in the building on their feat, singing along.

I forgot to mention that one of my poker buddies, Chilly, broke his Phish cherry with the St. Louis show. He went in totally blind. He didn't listen to anything before. He literally dove into the deep end... and he survived. He was a fan of Bob Dylan's Quinn the Eskimo, so like many Phish virgins, it's usually a familiar cover song that hooks them in.

I loved showing Chilly the lot scene and explaining the concept of Shakedown. Whenever he met random people or some of my tour friends, Chilly would say he's at his first show and never heard a single Phish song. Everyone thought he was joking... but he was deadly serious. Anyway, Phish is an acquired taste and not for everyone. I'm happy he was willing to take a leap of faith and just dive right in.

I saw this show with my buddy JW. He flew in from Seattle and caught his only show this summer. Usually the boys play two shows at the Gorge, but for some reason, they never made it to the Pacific Northwest. So, the only days off he could get meant he only had one shot at a show -- St. Louis. I know JW from when he lived in Las Vegas and we worked together in the poker magazine industry. He's a gambler at heart and rolled the dice with this particular tour. Man... talk about picking a hot show to go see! Especially since it was in the middle of the week. With Phish, you never know what you're going to get. That's why you can never dismiss a show when the schedule comes out.

Anyway... I felt setbreak was rather short. I don't have the exact numbers on hand, but both sets were approximately 90 minutes each. Three hours of Phish. What more can you ask for? Right? Everything else is gravy.

I was impressed with where Saturday's Atlanta Chalkdust jam ended up...morphing into What's the Use. When Phish kicked off the second set in St. Louis, I knew it just wasn't a greatest hits song to inject energy into the crowd. Rather, Chalkdust was a launching pad (or booster rocket) for the entire set. What I enjoyed the most about the first half of the second set was the seamless and smooth transitions in between songs. The band didn't rush things... moreso, Trey kept his ADD in check and patiently allowed jams to spill over into each other like Chalkdust > Frankie Sez and then again with Frankie > Undermind. By the way, Undermind is one of those Latin-flavored songs that gives Fish a chance to really show off his skills.

I loved every second of Sand. The tempo was strong from the start and Gordo injected some of his rugged, toughness. I like my Sand sultry, funky, and outright scary. This version included outstretched moments of psychedelic darkness, which is enough to spook anyone of shrooms or liquid. I was sober this show... but that's what's awesome about Phish is that they can suck you down the rabbit hole with their music so it feels like you're tripping balls. That's what Sand felt like.

Sometimes the band phones in Walk Away, but they were dialed in. Trey and Page fed off each other in a tete-a-tete and kept the second set energy up at its peak levels.

And then it happened. Limb by Limb. I won't ruin the song by regurgitating tons of praise and fluffy adjectives. Just take some time to yourself, turn out the lights, and crank up the song. Let the band take you on a journey.

Fishman always puts on a drum clinic with Limb by Limb. But whenever you expect a monster jam from Phish, you figure it's going to be one of their standard jam vehicles like Tweezer or DWD. But as the Joker summed it up best, Phish loves to surprise us by picking a random second-tiered song and tear it to shreds.

My measuring stick to determine whether a song delves off the deep end of the spectrum? If I forget what song they are playing. It happened not once, but twice during Limb by Limb. Daaaaaaaaaaaaaaaaaaaaaamn. Like I said, I had a sober show. That's how much of a mind-fuck Phish pulled off.

Limb by Limb was such an ass-kicker than the rest of the show was a blur (especially Julius). The fact that they tossed in a 2001 and YEM to cap off the set was the proverbial cherry on top of the sundae. Yeah, I can never have a bad time at a Phish show whenever it's a 2001 dance party and they anchor a set with YEM.

The encore was the Stones' Shine a Light, a soulful, yet soothing tune to end the show. My buddy Tom was chasing Shine a Light and I'm happy he got it for his hometown show. Phish usually blows a sizzling show with a cheesed-out, weak-sauce encore. But, I'm a fan of the Rolling Stones and one of my fav Stones' albums is Exile, so I'm thrilled whenever I hear anything off of that.

Anyway... on the way out of the venue, I told JW that he picked one helluva show to see Phish this summer. Luck of the draw? Or was Phish always gonna throw down in St. Louis? Who knows for sure... but if you were one of the lucky 10,000 or so phans at the show... they caught Phish on a good night when they were on top of their game. Folks came to party down and they were not disappointed. I can't wait to come back to St. Louis next year and hope they play two shows here!

Wish I could write more, but I got a plane to Colorado to catch. I wish I could've seen OKC, but I have a bunch of work stuff to do tomorrow. Alas... seven shows done for the this leg. Three more to go at Dick's. See ya in Denver.