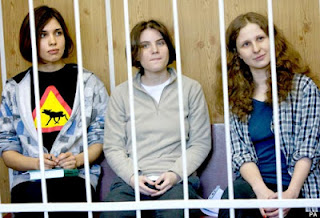 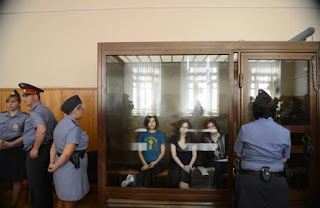 We have it lucky in America. As much as we live in an imperfect country, run by heartless puppets, and saddled with flawed legal system, at least we don't have to deal with the absurdities of the Russian kangaroo court. Just look at the Pussy Riot scandal. Three members of an all-girl punk band are facing three years in a labor camp for a stunt they played inside Christ the Savior Cathedral in Moscow.

Here's an interview with three members of the band on the lam...

I betcha this insane story will end up being a hastily thrown-together script for Law and Order and perhaps inspire a glammed-up Hollywood version starring Dakota Fanning, Juno, and the archery chick from the Hunger Games.

If you don't know anything about Pussy Riot, then start here with Masha Lipman's excellent coverage over at New Yorker:

Also, take a peek at Pussy Riot: Russian punks became the most important band on the planet and Making punk a threat again.

Once you read the statement, watch the video of Yekaterin delivering the speech in Russian. Here's Pussy Riot's amazing closing statement (in Russian without subtitles):

For more information on Pussy Riot, check out their website and their English-version Twitter feed @ENG_Pussy Riot.
Posted by Pauly at 4:20 AM

If you don't mind proceed with this extraordinary work and I anticipate a greater amount of your marvelous blog entries. Estate Planning Brandon FL