Phish at the Roxy - Early Thoughts 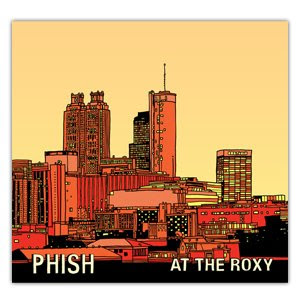 Ah, I got Phish Live at the Roxy yesterday. Three shows. 8 CDs. Pure bliss. I listened to it straight through last night. All three shows. I even sat through Bouncin'. Actually, I took a piss then. Just like if it happened at the show. I was actually at all three Roxy shows and back in '93 I kinda dug the song. It just worn thin on me over the years.

I went to college in Atlanta and attended all three of them with a sprained ankle. I busted it during an intramural hoops game against the meathead fraternity next door to us. Anyway, it's been 15 years since that three night run, hard to grasp that concept sometimes. Man, I did a ton of acid at those shows. That was the drug of choice back then. We had tons of shitty ditch weed and lots of speedy Acid.

I could hear my buddy Bob scream out at one point. His brother drove down from Illinois specifically for the shows. He was the catalyst who steered us to the Roxy for the epic three night run.

The Roxy shows were great writing music and I stayed up all night listening to them from start to finish. The 2/19/93 show is the only one that I listened to twice, so I'll sound off on that show.

What stood out the most was Page's quality of playing especially during a Stones cover of Loving Cup which kicked off the three show run. A couple of my friends thought that was a Phish song and I had to let them know that it was indeed a cover. Page was the anchor and glue back then. Trey is Trey and will always be Trey, but there were moments when Page was the glue that held Phish together.

I missed how the boys used to bust out the for bullhorn for Fee.

Moby Dick > Bowie made me smile because I went bonkers when I initially heard the Zeppelin intro to Bowie on that evening 15+ years ago. I was in a heavy Zeppelin phase back then in college. And how could you not lose your shit on a head full of acid when Fishman wanders out to the front of the stage for a vacuum solo? Seriously, that Bowie was packed with lots of gems that make Phish who they are... Simpsons language, plenty of Moby Dick and Manteca teases, even a quick happy birthday to Fishman.

The vocal jam at the end of YEM freaked me out. At one point I thought I heard cats meowing. Page's parents were also at the show and Page dedicated Lawn Boy to them. I gotta say, I don't even remember that. Then again, my mind is foggy and the memories from the Roxy shows have blended into one long Phish show.

Jimmy Herring (back when he was the the ARU) elevated the gang during his sit in for Funky Bitch. And of course, Fishman was back with a vac solo during Love You.

And, I dig the AC/DC Bag encore that they dedicated to a kid they partied with the night before. Trey said that they hadn't played it in a while and I was glad they did. It was that performance which got me hooked on AC/DC Bag and after the shows, I'd go a little mental hunting down cassette bootlegs all over the Emrory campus for any version of AC/DC Bag.

Irongirl01 said…
I just recd the newest Relix. Inside cover is an ad for Phish at the Roxy. Since I own zero phish i was wondering if this was a good one to start with. I defer to you and Cali Rob on all things Phish. So Im digging the review.

does the fact that I like bouncin make me totally lame? It makes me smile when i hear it as it reminds me of a childs nursery rhyme
11/19/2008 9:46 PM

partyinpeepsblog@gmail.com said…
"Actually, I took a piss then" = Hilarious.