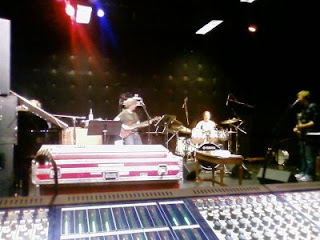 Pic courtesy of Mr. Minor
Hat tip to Mr. Minor for this one. The boys are in the big city and practicing. During his Northern Exposure tour, Trey hinted that band rehearsals were already underway. It's sorta confirmed now...

Songs that have been run through are 'Chalk Dust Torture,' 'Harry Hood,' 'First Tube,' certain songs off Billy Breathes and some unrecognizable songs

Above the trees where Billy Breathes. Sweet. I'm hoping that they get Taste and Free back into rotation.

I applaud the fact that the gang migrated to NYC to practice. They are definitely serious about getting in peak musical condition for the Hampton run. There's tons of energy in the city so I hope they can feed off of that. I can only imagine the endless distractions that could happen up in Vermont with a thousand barefoot children standing outside of The Barn milling about and awaiting for Trey to urinate in their ears.