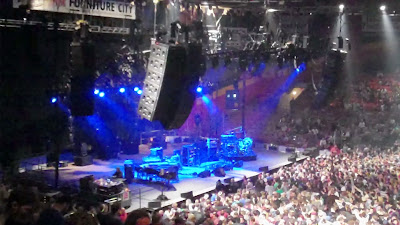 *Early View of the stage from my seat the floor filled early.

I started my day with this face book post:

Working till 2:30 PM then jumping in the Santa Fe and driving to Utica for the first of 6 Phish Concerts. I plan on videotaping and will upload to You Tube and Coventry Music Blog. Should be a nice Indian Summer Day in Upstate NY. Hoping to hear a First Tube. Other songs Id love to hear Moma Dance, Split Open and Melt..., Ghost, Cavern, Slave to the Traffic Light, Rock and Roll, Suzy Greenberg, Antelope, 2001.


First Tube is my Golden Fleece. I'm still chasing it but I'm only 6 live shows into my Phish career. And last night, Phish served up some of my requests and a whole bunch of other tasty morsels to digest.

I was raging solo for Utica. I opted to only take a half a day off so I worked till 2:30PM jumped in my car and after a quick stop at Starbucks was on my way. It was sunny and warm and I knew strolling shakedown pre-show would be more enjoyable then the snow squalls I encountered when I saw Furthur at the same venue back in February.

I've been listening to some older Phish by randomly picking out song titles and then watching the videos on You Tube. Coincidentally I listened to McGrupp for the first time on Tuesday night and they played it last night.

I got to the venue at about 4:30PM. I pulled into this big open field right across from the venue where phans were beginning to park and was chased and waved down by the Po Po. "You can't park here" I was told. So i politely asked where and Mr Po Po shrugged and said ' You'll have to park somewhere on the street". I asked permission to drive across the field to the road parallel to the venue and the railroad tracks and was granted it. I found a spot less then half a mile from the doors and an easy exit post show.

Once I got on Shakedown a dude had an extra ticket in the air for Amherst Saturday. I happened to be in the right place at the right time as another phan asked what show it was for and bought it. I looked at him and said I have and extra Sunday for face less the juice and in my first 5 minutes I had sold my extra Sunday Amherst for $60. Weee!!!!

Next stop will call for my ticket. I checked my text messages and had one from Dr Pauly advising me to rage on lot food for him and he felt a Piper a brewing (he was correct). After that it was back to Shakedown and I immediately found China Kat selling her heady rice krispie treats. Kat and I have been twitter friends for well over a year but hadn't actually met yet. She introduced me to her friends Ashley and Mike(?) and we hung out while Kat was waiting for Mountain Laura the correspondent for TWOL (This Week on Lot) podcast to arrive. 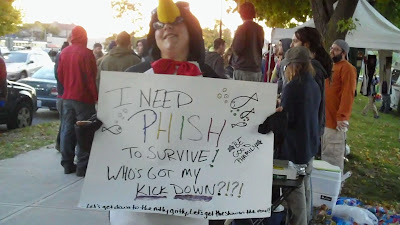 *Ashley looking for a miracle ticket. Ask Kat how Ashley got her golden ticket!!

Kat and crew went to their vehicle I went to mine and I decided to go inside a little early to stake out real estate in front of the sound boards on the floor. I got in after bluffing the person patting me down that my flip was really my cell phone (sometimes it pays to be a poker player) and realized the ticket takers had torn off and kept the stub with the bar code for my free download. I went over to tell them nicely that we needed it and was told our scanners aren't working so we have to keep it. I asked nicely again if I could have a stub back so I could get my download and they were discarding them into a slot. So I asked if I could look at a bar code before they discarded it and write it down. Security dude with the ticket takers gave me an annoyed look and made a sarcastic remark about "It looks like this is really important to you" I held my tongue but my eye roll told it all and I said "Yes, it is really important to us" (but you wouldn't understand ahole is what I was thinking but did not say) but he offered up his pen to me and I was happy.

Onto the floor I went in front of the boards. It sounded like a plan on paper and I hung out with two young dudes with the same idea. The floor filled quickly, very quickly. Since I wanted to film I didn't want to be crushed and jostled up front. Two tall dudes planted themselves directly in front of me as usual and I decided to head up to a seat. I had to go higher then i wanted but found a good spot on Page's side between the speakers which you can see in my video. The seat was fine with a great view of the stage, although I found the sound a little muddy inside the venue.

I found a solo seat in the middle of a row with empty space to either side of me for dancing. Two 20 something dudes sat down in front and one of them turned around reached out his hand and said 'Hi, I'm Adam". I introduced myself and we chatted and hung out the entire show. My intention was to write down the set lists. Although, I knew there would be blank holes in it since I don't know the actual names of all that many songs in the phish catalogue (currently 100 distinct songs in 6 live shows). Plus, I hate bothering people during the actual shows asking: "What's the name of this song?"

Lights down at 8:06 PM. I actually did pretty good with the song names until I stopped because I couldn't see where or what I was writing on or over. (Vultures came out as Vutures) The first song was a first timer for me and I wrote down "It's My Soul" (pretty darn close), Stealing Time from the Faulty plan I knew from the opening licks and recorded. I got Vultures after listening a few minutes and realized i had heard it before. I nailed Wolfman's and Cities and then decided to bail on my set list attempts. I didnt realize Guyute was Guyute while dancing. Kuroda was working his magic and I caught the tail end of the lights of Guyute on video and all of David Bowie. The crowd yelling David Bowie in rapid fire staccato was amazing. Then the back and forth almost taunting calls of Wilson by the audience in a small venue were haunting. I danced so hard from Wilson to the set end of Antelope. I was drenched and the auditorium felt like a sauna. If we were human batteries in the matrix we would have lit up all of Utica. The first set clocked in at 90 minutes.

At set break Adam and his shyer buddy and I talked about the upcoming AC shows and the poker tourney for the Mocking Bird Foundation. He had a friend who apparently tried to just buy in to the tourney and it has already sold out. I have not confirmed this but originally they were going to cap the field at 100 players. I'm registered. as is Dr Pauly. I'm not sure if Benjo (our other Coventry Crew AC tour mate jetting in from France to celebrate his birthday on Halloween) made it in to the tourney. If not Benjo can announce the tourney in perfect English !!! We also talked about the musical costume for Halloween. Adam confessed he too was a relative noob and i think he told me last night was his 6th show also. A UMASS Amherst grad, currently residing in Boston he'll be raging with his buddies this Saturday and Sunday. He mentioned a cool place to hang out in the Amherst area called the BookMill with 6 or so craft beers on tap and a good small menu.

After about 45 minutes of break for the band and cool off time for us the Phish came back on opening with Drowned. Mike's vocals were very strong and clear on this cover tune. They then jammed into a very strong Sand. Harmonies were strong on Theme from the bottom and I love Page's piano riff in that tune. I planned on recording the next tune but it was Axilla and i already recorded that at SPAC this summer. I don't believe they play it that often and I've heard it twice!! So I decided to record the next tune which was Birds of a Feather ( posted below earlier today)*****. I took a breather during Tela the only time I sat leaned on my chair. Then I got another of my requests. Split Open and Melt which I recorded as well as Have Mercy (another cover).From SOAM to the end the set raged. Out of Have Mercy into Piper back into SOAM and finally another one of my first time songs I wanted to hear: SLAVE to the Traffic Light aka Pauly's favorite song. The encore Led Zep's good time bad times was an awesome version. Page nailed the song and if they do decide to cover a Zep album for their musical costume, I think Page can pull of Plant's vocals. The encore wasn't rushed at all. It sounded like the guys were enjoying themselves and weren't in a hurry to get off stage. In fact when they took bows at the end it was like they lingered for a few minutes.

There was so much heat in the Utica Auditorium the exterior windows were completely fogged as we exited. In fact I thought it was going to rain inside. I made my way back to my car and was out of the lot by 12PM. I got home uploaded my videos and worked a full day today and feel chipper!!

I'm late to the Phish game but loving every show I see. Sure there are songs I like better then others (I am a funk fan) and I really have to go back and listen to a song a bunch of times before I become familiar with the intricacies of the jam.

Next up two shows in Amherst, MA with Dr Pauly and Senor. Uncle Dave of the McLovin family will be in attendance and I believe my good friend Mama Mcdrumlovin will be tagging along with Uncle Dave Saturday night. 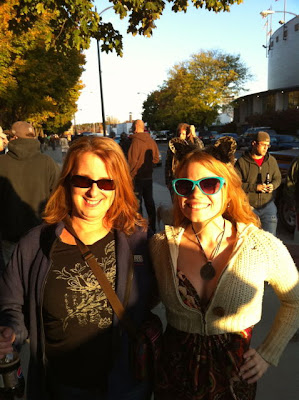 ***Videos of Guyute lights/Bowie, Stealing Time and Split Open & Melt/Have Mercy are uploaded to You Tube under Irongirl99
Labels: Phish

This Utica show is 'best of' the current era. So fun and sassy.

Beats out Alpine Valley Night 1 by the hair of it's (Guyutica) chinny chin chin.

BTreotch said…
pretty sure I would have lost a noodle during davidbowiewilsonguyute
10/22/2010 10:32 AM

Irongirl01 said…
I downloaded my freebie this am will have it for our road trip to AC. Phish is mailing new codes to everyone because of the scanner issue per phish.net.