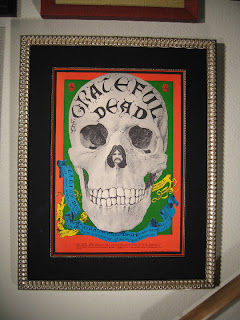 My Buddy Corey over at Furthur Frames in Denver forwarded me this link and story. If you like posters and rock & roll, you should check it out. Corey writes:

"For many years I've had the pleasure of working with Paul Epstein of Denver's Twist & Shout Records to frame many of his vintage posters he's collected throughout his life. While ogling Paul's posters at Twist & Shout recently, he & I were talking about other pieces I'd framed for him, and he invited me to his house to review the collection. I was absolutely blown away by how many pieces I've done for him over the years, and overwhelmed by how many great vintage pieces he has. Our perusing his collection inspired Paul to write up a little blog on how he came to have so many pieces of great vintage posters. I thought it was a great read with some amusing stories from the man who arguably most fanned the flames of my own poster habit. I hope you enjoy it and pass it on to any other poster freaks you think might enjoy it!

Paul Epstein's Blog from October 1, "My Journey With Posters"

Check out this passage from the blog:


There was one guy in particular I will never forget. Bill told me he knew someone who was selling off his psychedelic posters, and he had a bunch. We went out to a non-furnished house in South Boulder where a skinny, wired long-hair met us at the door with darting eyes and hustled us in and to a back room where we sat cross-legged on the floor and he produced a series of boxes full of vintage, first-pressing Fillmore and Avalon Posters. Bill had already been there once and gave his famous giggle as my eyes got big as saucers. At this point in history -probably late 84 or 85 - the real deal - the classic ballroom posters from 65-70 were still an unknown commodity to everyone but the people who originally experienced them - a number far fewer than their increasingly collectible nature might suggest. In other words, nobody was really collecting them and nobody really had any idea what they were worth. Remember 1969 was less than twenty years in the past and most of baby boomers were in full erase-your-youth-and-idealism-by-becoming-a-sellout mode. Not this guy though. He was selling his few possessions (the posters) so he could pursue a monk-like existence of whores and heroin in Thailand. He proudly told us the only Thai he needed to speak was “you got any heroin?” and “how much does it cost?” When I reached out to inspect a handful of posters he pushed my hand away “hands off bitch.” In the mid-80’s this was the first time I had ever been called a bitch (in fact it remains singular to this day). “Don’t touch them until you own them.”

Corey has also posted many more pictures of Paul's collection on the Furthur Frames Facebook Page.

I used to buy old Grateful Dead bootlegs and psychedelic posters from a place in Greenwich village called Psychedelic Solution it was pretty well known as was the Wetlands for gigs. I only have one poster left it s a pyschedelic rabbit for the 1987-1988 Chinese New Years show in San Francisco by an 2 artists one called Vegetable the other Erika. Dr P saw it when he crashed here for Phish.