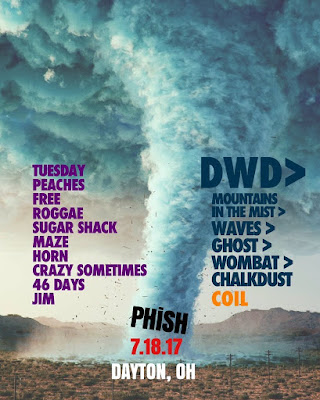 Phish tour continues. After a three-show run over the weekend in Chicago, Phish sweeps through Ohio and PA for single shows before settling down in NYC for Bakers Dozen. Phish returned to Dayton, Ohio... a seriously special place in the Phish lore.

Phish is offering a FREE webcast of Dayton. No need to get a Mixlr stream, when they giving you the visual dope for free over at LivePhish.

So what went down in Dayton? Here's what you missed...

Watch the free Dayton stream below... 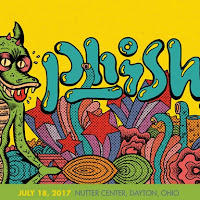 Another 20+ min jam. For a third straight show, Phish went deep with one of their second set tunes. This is a trend I can definitely get behind. On Saturday night, it was a splendid Simple, then a groove-heavy Carini on Sunday, and now... DWD... The Dayton DWD went deep.... The opener was a an old TAB tune -- Tuesday -- that finally got called up after toiling in the minors for a decade... Peaches was a little sloppy, but we'll take anything we can get... Roggae didn't get too out there... Another debut: Crazy Sometimes. Gordo tune. Weird as fuck, just like Gordo... Six-song second set anchored by Ghost > Wombat > Chalkdust in the 4Q... Silk-smooth Page finished the night off with a Coil encore... Four shows in the books, with one more to go in Pittsburgh before the circus reaches NYC.

From one Jason to another: Thank you as always Argonaut