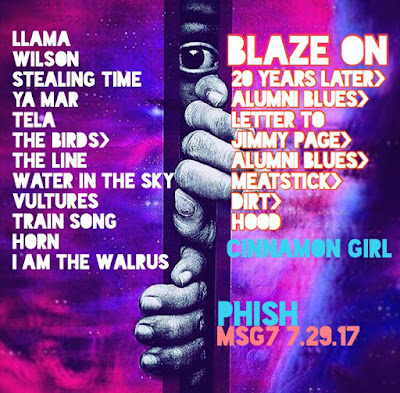 The entire MSG run will be webcast at LivePhish.

Set 1: Llama, Wilson > Stealing Time from the Faulty Plan, Ya Mar, Tela, The Birds > The Line, Water in the Sky, Vultures, Train Song, Horn, I Am the Walrus 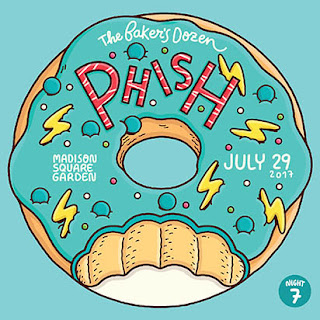 Saturday donut: Cinnamon... Pre-party in Wildo's baller glass suite a couple blocks from MSG... Saturday night NYC. Most fingers in the air thus far in front of MSG. Seemed like hundreds of desperate heads were in dire need. Floors were going for $500... Picked a perfect night for liquid sunshine when a pre-show warning echoed through MSG: "The brown donuts circulating around us are not good. Stay away from the brown donuts. Do not eat the brown donuts!" My French pal Benjo asked about the announcement and I explained the Woodstock reference and the supposed-bad brown acid that was going around... I knew Benjo got wasted when he stopped speaking English and only spoke French; I knew I was super-wasted when I understood every word... Sloppy Llama kicked off hyper-psychedelia show... Sat behind stage with Colorado girls in donut dresses who dubbed themselves the Sloppy Sisters... Thunderous jammed-out Wilson in the 2-hole... Benjo got his first YaMar... Things got weird during Tela when walls melted and CK5's lights were vibrant colors not found in the Crayola box... The Birds attacked whatever brain cells I had left... By Vultures, I was completely faced spun-cookies... Lost my mud at opening notes to I Am the Walrus. Beatles' cover closed the set. The Pet Cat samples spooked the shit out of me and "Everybody smokes pot" loop got stuck in my head... I feared the lights coming on and knew it was gonna be a rough setbreak. The worst thing about getting super spun is running into enthusiastic Phish nerds who want to dissect every moment of show when all I can say is "Brrrfugggahhkkklaccccjagag agaga aga gaga Leo!"... 23-min Blaze On kicked off the second set. Got lost too many times to count during sideways schizo-jam that got dark and nasty... Saturday had bunch of rare tunes like old school Alumni Blues > Jimmy Page. Trey insisted that Gordo play his bass, and he ripped off a weirdo-art-freak solo, while the two had a man-love-erotic moment... Colorado friend said she evaluated her life during set 2 and considered becoming a vegetarian, but changed her mind when Meatstick began... Crowd lapped up Mt. HOOD. Peaks within peaks and an in-your-face Mountain Jam tease that induced goosebumps... Another Neil Young cover. Everyone expected Cinnamon Girl and the boys delivered on the only themed-song of Night 7.... Finally reached mid-way point. Seven down, 6 more to go.

Argo is the Walrus...