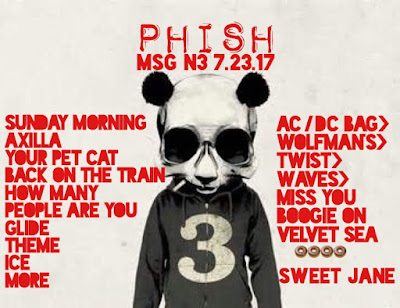 The third night of the MSG Baker's Dozen fell on a Sunday. You know the saying... yadda yadda yadda. With Red Velvet as the daily donut, plenty of speculation with potential Velvet Underground covers and other red-themed tunes.

The entire run will be webcast on LivePhish. Check Terrapin Radio for any Mixlr audio feeds.

Here's what you missed for Night 3...

Set 1: Sunday Morning**, Axilla, Your Pet Cat, Back on the Train, How Many People Are You, Glide, Theme, It's Ice, More 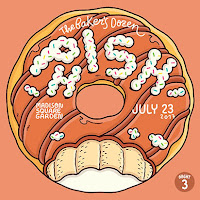 Sunday Donut: Red Velvet... Which Velvet Underground covers would we get? Any other red-themed tunes?... Velvet curveball with Sunday Morning opener. Fish dressed up like the Pope and dosed the crowd the "holy water"... Does Fish shit in the woods?... I had to work after first 2 shows, so Sunday first night I could really let loose and party. Although, my source dried up and we had to call an audible for a last-minute alternative. Rolled the dice with an unreliable source. About 30 mins before showtime, I found my seat and wondered when everything would kick in. That's when I heard the deafening "Pauuuuuuuuuuuuly!" It came from Senor sitting two section over. Ahh yup. Clearly, the hooker molly worked... Benjo stayed up all night, then flew on a 6am flight Vegas>NYC to make his first show of the run... Back on the Train in Benjo's honor... By night 3, the first cracks in the crowd began to show. Thank Pope Fish XIII that we didn't have 13 shows in 13 days...  Sloppy wobbly Glide. Like my schwilly ass... ICE jam took off into unchartered waters. Got lost in another first set jam... Note to self: Trey really loves playing MORE... Never realize how fucked up I am until I walk into the bathroom.... Bag opened second set instead of R&R or another Velvet cover... Wolfman's  transformed into a first-set staple in 3.0, it felt weird to hear it in the second set. Wolfjam featured a couple of (forced) peaks... Twist went sideways from the get go. Jam of the night? Thankfully Big Red did not try to incite woos like your one pathetic friend who's constantly begging for likes... Gordo got sick of Trey's Wolfjam and muscled in on his turf. Gordo unleashed his big guns and entire jam launched into a freakier direction... Quickie Waves... 4Q lull with Miss You... Fatty boombatty Boogie On injected instant ass shaking... Velvet Sea closed out the set. One of the stronger ones I caught, while washed in a velvety-red sea of Kuroda lights... Single encore, but another Velvets cover. This time: Sweet Jane. Hot-hot rendition. Jane either made the show, or saved the show depending on your outlook. She never got as much love as R&R or other LOADED covers. I caught 3/4 previous Janes including Vegas 98 Halloween with Senor and Javier. "It only took me almost 20 years to hear Sweet Jane again!" screamed Senor... 3 down, 10 to go.

I'm here again tonight....can't wait to see what they offer up for night 3! NEVER MISS A SUNDAY SHOW!

So much gratitude Argo...glad you got to be there again.