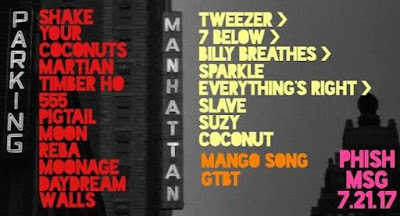 The moment everyone has been waiting for... Phish kicked off the Bakers Dozen run with a Friday night show in NYC.

The entire run will be webcast on LivePhish. Check Terrapin Radio for any Mixlr audio feeds.

Here's what went down on the opening night... 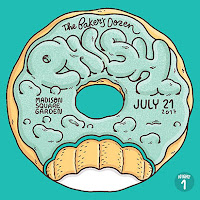 MSG was always sacred ground for me. Saw my first-ever Dead show at MSG when I was 15 years old. My path never the same since that magical night... Bakers Dozen donut theme out in full force... Felicified's Federal Donuts provided free donuts at entrances (while supplies lasted). I got the next-to-last donut: a specialty coconut... Didn't know how vital the donuts would come into play until show kicked off with a cover of Shake Your Coconut. The boys played off a loose coconut theme all night... Saw N1 with Senor. We followed Phish in Japan 2000 tour. The MSG October 1996 run was the first shows we caught together. Fitting that we returned 21 years later to kick off the Bakers Dozen... Stellar seats three rows behind the stage, hovering between Gordo and Fish... Close up views of CK5's new light rig. Thrilled the LEDs are dunzo... Jittery crowd. Oodles of excitement. Hadn't felt like that frenetic, frantic vibe since 2009... Martian Monster first repeat of the summer tour... Forgot how the floor of MSG bounces... Schwilly jewish girls LOVE Senor... Timber in the 2-hole!... Pigtail = mehtail but they needed to dig deep into their bag of tricks if they don't want to repeat any songs in 13 shows... Party favors kicked in by Reba. Had eyes closed then opened up to see bright red lights and I forgot I was at a Phish show for several minutes... Crowd went berserk for Moonage Daydream. Bowie love early on... Thought they'd open run with Tweezer, but it launched the second set... Seven Below jam of the night?... Spun out chick humped a giant happy face balloon, but the screeching noises were so loud, one of the security guards almost 86d her... Throwback time with Billy Breathes... Senor was the guy screaming at top of his lungs during Sparkle... Everything's Right jam cut short for silky smooth SLAVE. Thought they'd save it for N13. Got my fav tune on N1!... Suzy energy booster set closer...almost... A capella cover of Nilsson's Coconuts bookended the coconut donut theme... Double dip encore! Semi-bustout with Mango Song. Nothing special, but felt like they needed to close out with a smoker. Senor said, "How about that Zepplin tune they play?" And Trey instantly launched into opening riff to Good Times Bad Times... I dunno how many times I saw GTBT at MSG, but Trey ALWAYS smokes the shit out of it... Fun start. Which donut/covers get introduced on Saturday?... One down, 12 more to go.

so fast, thank you argonaut, and thank you coventry blog. you're all the best :)

What the stallion said... I concur

Thanks for the fresh droids. They're humming with beautiful sounds.

@Argo.... excellent work as per usual.

I love it when Phish plays Zeppelin. I think they do it better than Zeppelin did

Thanks much. Going to be fun playing along at home with this run.

Any help? I can't find the droids I'm looking for?