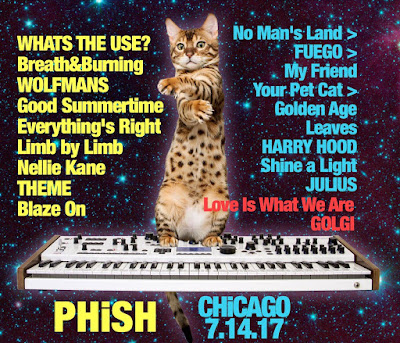 Phish kicked off summer tour with three shows in Chicago at Northerly Island. Hopefully there will not be a monsoon this year.

Any dank Mixlr streams will be posted here: mdawg | lvnphish

And let's get the show on the road. For the Chicago tour opener, three new songs got played with four total debuts. Here's what you missed...

Encore: Love Is What We Are *, Golgi 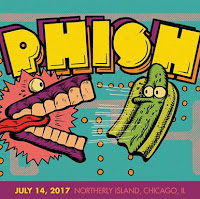 Crisp/dank stream courtesy of mdawg! He made couch tour possible. Thanks brah...

Summer tour kicked off with a curveball: What's the Use. Asked us that question? Themselves? Who knows? WTU came out of nowhere, which set the theme for the night... Gordo rocked out in wild outfits from the get go... B&B inserted in the starting lineup batting in the 2-hole. That's good/bad depending on your outlook on Phish... Wolfbrah's funk flow... First time played: a capella cover of Good Summertime... First of three new songs: Everything's Right... Performed with Trey Band earlier this spring, but called up from the minors after a stint in the Cape Cod League. Everything sounded like More's little brother. Highlighted by badass jam with heavy Page synth/keys.... Jam of the Night spawned from a noob tune in first set?... Swear I heard Trey/Fish scream "Glaze on!" during Blaze On... Low energy Fuego? Most of the night half-notch slower all around... Your Pet Cat > Golden Age > Your Pet stood out. Trey wanted to play Golden Age earlier but the band fought him on it. They finally gave in after Cat mayhem... Spacey 2001 teased and teased yet blue ball'd cuckblocke' by dad rock... Second new tune: Leaves (written by Tom Marshall). Needs some work like all new tunes... The HOOD everyone was waiting for. Stuffed with juicy teases/licks from Mountain Jam to WTU (Reprise)... Any Exile cover is fine with me and Shine A Light was a welcomed mid-4Q slow tune... Julius attempted to inject much-need energy back into crowd before show ended... Double-dip encore. Third new tune: Love Is What We Are... Weakest of the new trio... Golgi closed out the first show back... Shook off rust with a mix of old/new. Three new Phish tunes in addition to an old timey cover... One down, two more to go in Chi-town.

Thank you for the protocol droid. Although... it was not the one I was looking for.