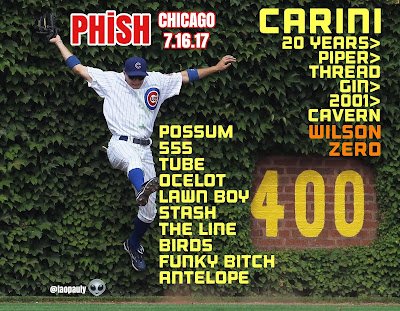 Thanks to the quality Mixlr streams courtesy of.... mdawg | lvnphish

Sunday night in Chicago. Here's what you missed... 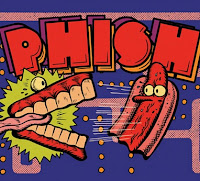 Final leg of a three-show run at Northerly Island... Sunday Funday delivered oodles of fun, plus another debut and another big jam: Carini. The 20-min version is all you need to listen to today to get you fired up abut Bakers Dozen... In the first set, the chatty Chadtastic Chicago crowd got treated to a 6-minute Tube. Short and sweet, but the cow-funk-mongers squeezed as much as they could into that stretchy-pants funk... Carini anchored the Chicago finale. A 20+ minute groove-oriented Carini kicked off the second set... Despite the initial rumbling grumblings about 20 Years Later, the jam out of the nostalgia-tinged tune delivered a bombastic surprise... 2001 dance party in full swing. Even Fishman could not contain his excitement and grunted James Brown Sex Machine lyrics... Another noob tune: Thread. This rookie has potential. Reminded me of a Soundgraden B-side from the late 1980s (before Chris Cornell et al got famous for being a "grunge" band)... Double-dip encore with a pair of rockers: Wilson/Zero.... Three shows in Chicago dunzo. Two more shows on deck in Dayton and Pittsburgh before the psychedelic circus reaches Manhattan Island.

Thanks, Argo. Andy Mueller, try re-downloading, worked fine for me.

Working for me now. not sure what happened. Thanks argo!