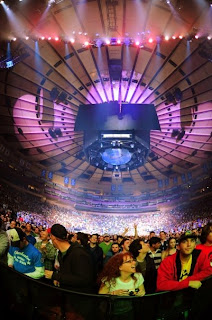 I tried to write a post about last night's Phish show at MSG, but it simply didn't translate and I deleted it in frustration. Without further ado, here's what I remember about last night:
Severe inebriation. There is really no other way to describe it. Staggering.
"Can't I Live While I'm Young?!!?" Anthemic. That's the word.
"Brain dead, and made of money - no future at all" for some reason I always feel like that line is for me - not that I'm brain dead, but that I'm wasting my talents. Anyway.
The crowd was DEAFENINGLY loud. Probably the loudest I've ever heard.
There were an ample supply of wookies looking for freebie tickets before the show.
Trey was fired up during Tweezer Reprise - so much so that I thought they might audible one more song.
"I sawwwwwwwwwwwwwww you - with a ticket stub in your hand!"
"Set the gearshift for the high gear of your soullllllllll. You've gotta run like an antelope - out of control." - also anthemic.
My boy Ryan pulled an advanced maneuver when I went to "cheers" him by knocking my beer bottle against his. He simply took the beer from my outstanded hand, tipped it in my direction, and drank it. Well done, sir.
I texted Dr. Pauly "I cannot drive right now." "I thought you took the train?" he replied. "I did. I'm just giving you a benchmark of how drunk I am" I explained.
Staggering out of the subway in the rain after the show, I walked the wrong direction for 3 blocks before I realized that I was off target.
I knocked down a cheeseburger at 1am - which was essential to absorb some of the booze in my stomach.
Beers at MSG cost $8.25 and up! What recession?

Ryan brought a pair of 3D glasses - which were tremendous to wear during the show, distorting all the lights. "It's like drugs, without the drugs," we opined.
This morning I was awakened at 5am by the sound of a little kid screaming, coming from the air conditioning vent in the bedroom I was in. I quickly realized that this was a fun game - for the kid at least - he was literally screaming INTO the vent (on another floor of the same building). Thanks, parents.
Checking my inventory - I seem to still have my wallet, phone and clothes from last night - so we'll call it a rousing success.
Can't wait to do it all over again tonight - and tomorrow.
-KD
Posted by Kid Dynamite at 4:20 AM

Email ThisBlogThis!Share to TwitterShare to FacebookShare to Pinterest
Labels: MSG

"Checking my inventory - I seem to still have my wallet, phone and clothes from last night - so we'll call it a rousing success."

Hilarious. If I had a dime for every time I checked my inventory...