Show Recap: MSG Night 2 - All Aboard the Funk Train

Show #183. The better shows are the some of the most difficult to describe. The gory trainwrecks are easy to dissect and spew about. The top notch shows are tougher to describe to my friends because it is hard for me to explain why the music clicked inside my brain. Simply put -- it either does or it doesn't for me... but... you have to go listen for yourself.

I know it's a good show when I have very little notes and don't say much on Twitter. That means I was having too good of a time rocking out and dancing with my girlfriend. That kinda summed up Thursday.

Wednesday had a couple of untouchable and savory moments, but as a whole, the Thursday night show was more of a complete package. More often than not, shows look more enticing on paper than in real life. But on Thursday? The setlist lived up to the hype. 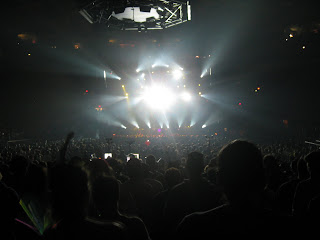 I shot this from the back of the floor
There is only one song that I would have not selected. Everyone knows my personal bias against the first 90% of Time Turns Elastic but if they aborted that show snoozer and jammed out Bathtub Gin or MoMA Dance instead for fracturing the crowd with TTE... then I'd be writing about one of best MSG shows I had ever seen.

Pre-party was much like the previous night. Food and booze at Molly Wee. The bacon burgers are salacious. Senor arrived in time for two vodka/red bulls and he was saucy before we walked inside. Senor and I have seen a fair amount of shows together -- including Japan and too many MSG shows to count. He brought along our other buddy, Gil, who I haven't seen in four years or since his wedding! Whenever Gil and I go to a show together Phish ends up playing Guyute. I really felt it coming along with PYITE since someone put it on the stereo system when we had first walked into the bar.

Nick (aka Change100) and I had floor seats -- near the back on the risers. She could see a lot better and it was refreshing to be out from behind the stage -- somewhere I had been the last three shows. I don't mind sitting there for a different perspective but floor seats at the Garden are somewhat special. Senor and Gil had prime spots on the floor in front of the soundboard. After a few more cocktails, Senor admittedly had become "that guy" at the show. Sloshed and jumping and dancing hard to every song. Could you blame him? I dunno if I even stopped grooving during that second set.

Set I: PYITE, Backwards, Axilla I > Taste, Boogie On, Stash, Lawn Boy, Time Turns Elastic, Back On The Train, Julius

I was grinning ear to ear with PYITE. I told ya that I felt it coming. Too bad I didn't wager any big bucks on the opener. Now that I've seen it almost a dozen times, I prefer Backwards in the second set where they can open it up and extend the jam. You don't take out a sports car to drive in traffic and you save it for a wide open road. That's my Backwards take. I jizzed myself with Axilla. After the bustout in Cincy, I was hoping that they would keep it on their radar. More than thrilled when it popped up during the first set. I love Page. It's a bromance thing. So I get a little woozy when Page gets to shine during Taste jams. I'm praying for Torn & Frayed on Friday or Saturday.

The highlight of the first set was a compact and funkified Boogie On Reggae Woman. I tweet'd that it was one of the better versions of the Stevie Wonder cover that I've seen since Chula Vista in 1999 (arguably the best rendition clocking in over 20 minutes but in 1999, the boys engaged in more Type-II and ambient jamming so that Boogie On morphed into a beast of its own). The MSG version was all funk courtesy of Gordo. I sorta forgot about Mike until his bass took control. Although the show had many elements of a "Greatest Hits" show, there was a heavy underlying funk component.

Stash is when everything I ingested had met head-on. The booze, buds, and pharmies all collided and my mind was a plate of pudding. Page evoked his inner lounge singer for Lawn Boy which always makes my girlfriend happy.. If Pge never met Trey and company and never joined Phish, then I'm convinced that he would have ended up in Las Vegas pecking away in a lounge on the Strip doing his Richard Cheese meets Frank Sinatra shtick. When Page sings Lawn Boy we get a glimpse of his alternative universe.

And then Phish dropped the set killer. Time Turns Elastic is my all time #1 Pauly Takes a Piss Song. What sucks about that is that 25% of the crowd does the same while the other 25% heads to the beer line. Nicky went to the ladies room and reported back that chicks were snorting lines in the stalls during TTE. Well, there's a new one for ya. For all of you cokefreaks and mollysniffers in Phisdom, TTE is a rip a few rails song.

Me? I pissed. Got liquids. Smoked a bowl of Kush. Sent out a snarky Tweet. Read Twitter. Checked the Jets/Buffalo score. Read Coventry blog and Joker's setlist updates. Waited for my girlfriend to come back. Smoked another bowl. Read more negative comments about TTE on Twitter then raged it for the last three minutes of the song... which is my favorite part. Seriously, if they chopped off the first 20 minutes, the song is amazing.

Phisheads are some of the most critical music lovers I have met, but they are also among the most open. I have been seeing Phish for two decades and have never seen more than 50% of the crowd empty out during a song until Time Turns Elastic came around. The phans reaction is a fairly good indicator of the reality -- TTE is Old Yeller. Time to put a bullet in the dying pooch's head and find a new puppy to play with.

Thankfully, the boys saved the set with the funk train! Back on the Train is what I call country-funk or what would eventually happen if Johnny Cash smoked crack with George Clinton. The funk brought everyone back inside. Grooving. Groping.

Phish kept everyone on their feet for a floor-moving Julius. When I think about Julius, I'm getting flashes of bright white light and phans with their arms thrust into the air.

I have a feeling that Thursday MSG is kinda like Albany Saturday in that you'll probably only own a copy of Set 2 of those shows. That's all you're gonna want to listen to because the first sets were inferior in comparison. Heavy hitters. More funk. Lots of jamming. Relentless bombardment. Non-stop ass shaking. That's why I go see Phish, why heads travel thousands of miles to see one show, and why people at home scream "FUCK YOU" at their laptops when the live stream drops out.

More funk flowed with the Talking Heads' Cities. It's one of those covers I'd like to hear every show. Free might have been the weakest part of the set and I still think that it was a scorcher. It seemed as though Trey called an audible and switched up the song at the last second. Halley's Comet had a few flubs but I love the echos of the crowd chanting. The ending was a bit shaky before the 2001 dance party throw down. I've seen a few wrecks during Bowie this summer. Good to hear a cleaner and tighter version to close the set.

I had to pee. I needed more beer. But I didn't leave my seat once during the second set. Not a single lull for me to wander off. From start to finish. Smoke. I guess that's what it felt like to be in Cincy?

Nicky suggested a slow song for the encore to counter-balance the heat in the second set. "I guess not," she said as Trey let the first notes rip to Character Zero.

When the lights came on, it felt like I had been in a fight. I was all battered and bruised and heavily faded. It's about 10 hours after the show ended and I'm still processing everything. Second set rocked. It might be tough to top on Friday... but there's plenty of heavy hitters and a slew of bust out material available.

Two down... one more to go.
Labels: MSG Phish