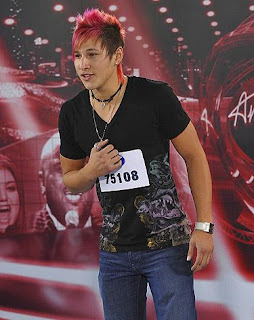 Remember last season's drealock boy Jason Castro? That's his little brother!
As many of you know, I am an unapologetic American Idol fan and every season I blog about the show over at my primary home, Pot Committed. Season 8 kicked off this week with highlights from the auditions in Phoenix and Kansas City and while there were plenty of shenanigans, gimmicks, and general tomfoolery, several front-runners for the Top 12 have already emerged including a latter-day Aretha, Stevie Nicks' namesake, and an intriguing Janis/Grace Slick hybrid. Throughout the audition weeks, I'll be revealing my top five front-runners each Thursday and then recapping the performance shows every Wednesday.

Come on all you jam band aficionados-slash-Idol fans-- out of the closet, I implore you!

Check out the first installment, American Idol, Year Eight (which also includes a fair amount of pontification on the Golden Globe Awards and the relevance of the entertainment industry amidst global crises).
Posted by change100 at 4:20 AM