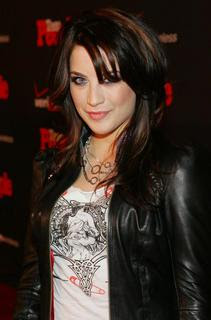 As American Idol enters its eighth season, it's clear to most viewers by now that some serious pros are getting put through to Hollywood at a rapid clip. Witness last season's Carly Smithson, Michael Johns, and Kristy Lee Cook, all Top 12-ers who had previously released major-label recordings. Now, we have 23-year old Joanna Pacitti (above), who takes the notion of AI "ringers" to new heights, having released a 2006 album on Geffen Records, toured with artists like Sheryl Crow, and contributed songs to no less than half a dozen film soundtracks.

Where should American Idol draw the line when it comes to allowing professionals to compete on the show? For my own half-baked thoughts, check out this week's Idol recap American Idol: Enter the Ringer.
Posted by change100 at 4:20 PM