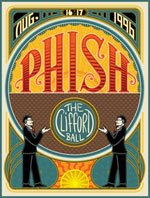 The Phish have a brand spanking new DVD that will be released on March 3. Here's what the said in a press release...

The Clifford Ball was the first of six two-day spectacles the band staged, including The Great Went a year later, followed by Lemonwheel in 1998 and culminating in Big Cypress - the largest ticketed event in the world for the millennium celebrations, drawing over 90,000. The Clifford Ball was held in Plattsburgh, New York, at a decommissioned air force base, during which Phish played two marathon concerts which included multiple guests.

This highly anticipated DVD, which comes out on March 3, should be a good fix for everyone who couldn't make it out to Hampton.

Click here to pre-order a copy of the Clifford Ball DVD.
Posted by Pauly at 4:20 AM