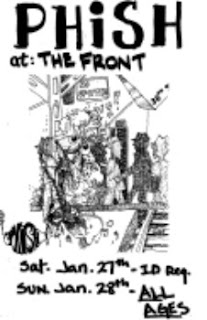 Let's flashback to almost twenty years ago. Vermont 1990. The early days of Phish. They played the second of back-to-back gigs at The Front. They repeated several songs from the night before including a cover of Communication Breakdown. They performed the Zeppelin song the previous night for the first time. They played it again the next evening and closed the first set with a tighter version.

The Front show is historic for a couple of reasons. It was a classic potpourri show that really had a bit of everything; Gamehendge, covers, fan favorites, and some freaky ass shit such as BBFCFM. And for all the heads out there jonesin' for Fluffhead, well here's your chance to gobble up this silky version.

The set list was peppered with several sensational songs that would evolve into Phish classics or what I like to call "heavy hitters." Those songs include Split Open and Melt, Wilson, Antelope, YEM, and Bathtub Gin. Listening to those songs circa 1990 gives you a unique perspective on the early incarnations of some of your favorite Phish songs. I actually dig the fact that Wilson begins without an audience chant.

Suzy Greenburg to open the show showcased Page's astute playing on the keys. Trey always got a ton of attention, but Page was really the glue that held the band together back in the early 1990s.

The two-song encore was spot on as Page and Mike's contributions to the band were highlighted. I'm a sucker for Page crooning the audience during Lawn Boy. And let's not forget Mike's odd concoction of a song Big Black Fury Creature from Mars. That's a risky tune. Either you love it or loathe it. And the boys closed the show with that gem.
Labels: Phish Phishtory Downloads

mf76 said…
Thank you so much! My friend Russell got me into Phish and my first show was 1990 @ Nektars...amazing show. I remember this tape being our favorite. I haven't heard this in YEARS as I kind of lost track of Phish in the mid 90's. I'm starting to go back and get re-aquainted and this tape was a MUST have. Never thought I'd hear it again...Thanks again, you made my month! (downloading it now).
6/11/2009 1:25 PM