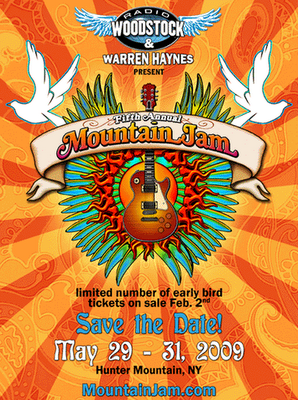 There will definitely be a whole lot of shaking going on this Spring into the Summer. Mountain Jam V is sandwiched between the East Coast run of The Dead's Spring Tour and the newly announced Summer Phish tour (see the Joker's post here) which is also heavy on East Coast dates.

One can only dream that both those bands would land on Hunter MT but the little winding road up to the mountain wouldnt be able to handle the traffic. A girl can dream though cant she? It's not outside the realm of possiblity for a Dead appearance, as Mountain Jam host Warren Haynes is touring with the Dead and both Phil & Friends and Ratdog have performed at previous Mountain Jams.

Stay tuned to the offical Mt Jam V website for the initial line-up to be announced the week of January 19th.

A Limited Number of Early Bird Tickets will go on sale Monday, February 2nd 2009
Posted by Irongirl01 at 4:20 AM