Skip to main content
Posted by the joker January 21, 2008 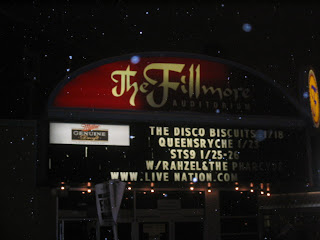 I am resting up today after 4 nights of Bisco and 1 day of skiing and playoff football. It was quite a run. Friday night The Disco Biscuits played Denver and Saturday night they played Vail.

The Denver show was probably my least favorite out of the 4 shows. I was bored the first set of the Denver show- I was excited to hear Voices Insane but thought that the jam out of it went nowhere. They played a couple of my favorite songs in the second set but I thought it lacked flow. I am usually very excited to hear M.E.M.P.H.I.S. (Making easy money, pimpin' ho's in style), but for some reason I thought the placement in the middle of the second set after the loud, fast & nasty Little Betty Boop> Above The Waves did not make any sense. People will disagree with me as some of my friends loved the Denver show, but I was not that into it.

When I woke up Saturday afternoon I did not want to go anywhere...three straight nights of music, partying and little sleep had worn on me. Somehow I rallied and drove up to meet the crew in Breckenridge and drive to the Vail show. The sound was better than I remembered from other shows at Dobson - it is a skating rink that had a floor and stage set up for the concert. The Vail show was probably my second favorite of the run (Boulder being my favorite). Many music nerds will want to talk about the 45+ minute version of I-Man in the second set. Bisco did not stop playing between songs at all both sets; the I-Man and Nughugffer together were over an hour in the second set. I had fun dancing to the jamming and segues at the show, it will be interesting to see if it holds up on tape.

I could not get my camera into the Fillmore, but here is the video from Vail...