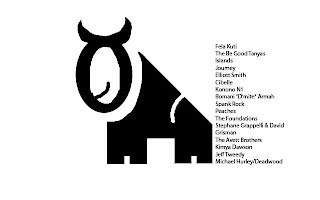 Aloha. Thanks to Joker and Pauly for opening the door to the Coventry blog. I'd like to start off by posting this sweet mix - if you were a saucy red head with a nice rack and this was pre 1995, I'd put this on a tape, break off the tabs so you couldn't record over it, label with block print and ask you out to dinner and movie a week later. Hopefully we'd end up back at your place and you would still have the tape in your tape deck. You could play it - I wouldn't be embarrassed, it'd be sorta cute. I'd hope you weren't really thirteen, and that Afrobeat had a disrobing effect on you.

For those who like go the extra mile with their video Ipods, you can download album artwork here. If you'd like complete albums by some of these artists, let me know and I'll try to post them.