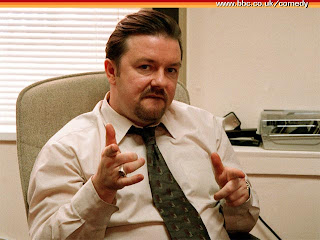 If I had to be stuck on a desert island with someone, I'd certainly consider Ricky Gervais. The Office is one of the most brilliant shows ever and Extras is also high quality funny stuff. Now, if Ricky brought his Desert Island Disc and we had Hugo's everlasting CD player, I may have to bury Ricky's cd in the sand after a few weeks and ask him to tell me more stories. Don't get me wrong, I'm a big fan of most of the artists he included, but I would have to forgo love songs when stuck on a desert island with Ricky Gervais. But then again, that wasn't part of the rules when he made his list, and hell, perhaps we'd find love.... I think I'm getting off track.

He just released a podcast where he gives a good interview listing his Desert Island Disc songs, talks about growing up in Reading, UK, and his journey to current stardom. His humility and loathing of celebrity culture is admirable.

Evidently the songs were not cleared so the interview lacks some of the punch it should. Fear not. BTreotch loves mixes so much that I put them together to see how'd they jive.