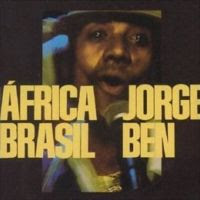 So, with these great radio and internet DJ spots Radiohead has been doing, Ed O'Brien (the less weird guitarist) has included infectious Jorge Ben songs that equal automatic ass shaking. It was great to hear. I was turned onto Jorge Ben - wiki tells me he changed it to Jorge Ben Jor to avoid royalty confusion with the American guitarist George Benson - when a friend dumped a whole bunch of music onto a DVD for me. A'frica Brasil was an instant stand out - excellent melting pot, polyrhythmic music that causes involuntary fist pumping. The guy has an epic catalog, he's been putting out almost an album a year for five decades.

Have a listen to A'frica Brasil here.

One fun note, check out the song Taj Mahal and see what other song comes to mind. I would always sing the lyrics to the famous tune along with the song with some repugnance, but it was just irresistible. Turns out some famous pseudo rocker who married up had to pay royalties to UNICEF for jacking the melody after Jorge Ben filed a plagiarism lawsuit.
Labels: Jorge Ben