3D Phish: A Recap and Review 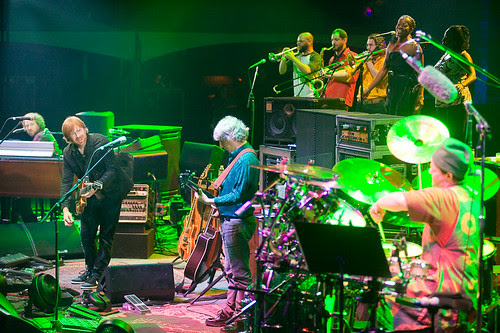 I had not thought too much about Phish the last few months. After an exhausting 2009, marking the return of the Phish, I was eager to put that expensive hobby/cult aside for the first half of 2010 as I concentrated on freelance work and finishing the final draft of my book. I even cut back on the amount of Phish I listen to on a daily basis. When the Phish 3D movie was being released this week, I was particularly excited because I had not had a serious does of Phish since the NYE run in Miami.

Sometimes, too much of one thing is bad, so it feels good to take a step away and get perspective on things, and then re-immerse yourself back in. As a result, I really enjoyed myself with the Phish 3D movie (even though this recap is going to sound like I didn't have a good time). I had a blast but left with a few minor notes for the filmmakers.

The 3D? Not so much. It's a gimmick and Hollyweird is going to beat that trend to death like a dead horse that finished last in the Kentucky Derby.

"3D? Anything to justify a raise in ticket prices and get paying customers into the theatre," remarked my girlfriend, Change100, who knows how studio execs think because she used to be one.

I admit, I'm one of seventeen people who has not seen Avatar. However, I've done enough psychedelics in my day to see stuff floating around in front of me, so I don't need snazzy glasses in order to get a cheap thrill. Besides, Jim Cameron is a Grade-A douchebag... even by Hollywood standards.

The Phish 3D movie could have done just as well without the 3D. After the fourth or fifth balloon that passed by, the 3D effect lost its luster. One of the coolest 3D effects that I dug -- it seemed like I could reach out and tap one of Fishman's high hats whenever the camera panned to give you a left profile shot of Fish and the rest of Phish on stage.

The sound was impeccable. Someone must have complained because towards the end of the AC/DC Bag opener, the sound got cranked up in our theatre. The HD camera work was more impressive than the 3D. My eyesight isn't what it used to be, but it was cool to see the setlist written out paper that were attached to Fish's kit or Page's rig. During the Exile on Main Street set, you could see the sheet music and lyrics to the Stones songs, which is something you never see at a regular Phish show, but maybe Trey should print out some of the lyrics to Cavern so he doesn't flub it for the umpteenth time this summer?

I attended the Indio shows, so I definitely have a "Best of Festival 8" song list and only a couple of those were featured in the film. As a whole, the setlist might irk hardcore heads, but it was safe enough that your non-Phishead friends could enjoy. The lack of meandering jams makes the film edible for those "I hate it when Trey noodles" Phish-haters.

The best part of the film for me were the behind the scenes practice session with Sharon Jones and the horn section. The little bit of Suzy Greenburg rehearsal stood out and I wanted more. I was excited to see more outtakes/footage during the closing credits.

Man, if was editing this film, I would have had more of that rehearsal banter. And of course, a few more Exile tunes. Loving Cup was one of the highlights of the Halloween cover set, and it was one of the MVP candidates for the movie.

The film did a great job at capturing the musicians in their element, but Festival 8 as a whole was overlooked. I would have also like to have seen more B-roll. The IT DVD had its moments; the low points were an obvious wasted Trey in his interviews, but the best parts focused on random footage of heads interacting and exploring the IT festival grounds. The final cut of Phish 3D had exquisite concert footage, which demonstrated what it is like to see live Phish, but the film failed to encapsulate the entire Phish experience. During some of the jam outs, I would have liked to have seen B-roll of the camping areas, or heads in costumes, or some of the many art installations in the actual festival grounds (aside from the Blurble). Who needs another close up of Trey soloing when we could look at fire sculptures or awesome costumes?

I tried to look for my crew during the afternoon set, but I couldn't find us. I did come across one guy who was wearing Joker's Wolfman's Brotha shirt. I gotta say that I was just mildly impressed with Get Back on the Train when I saw it live, but I was blown away with a clearer mix in the film. That was also one of my favorite bits.

I saw the film with Nicky and Chicago Bob. Back in the day, Bob and I used to see Phish circa 91-92. That was such a long time ago and in a galaxy far, far away. We caught a showing in a theatre in Beverly Hills, which would be the last part of LA I'd ever expect to have a Phishy experience. The theatre had a balcony and that's where most of the rowdy heads hung out. A couple of Phishy chicks up there were hootin' and hollerin'. Had no idea if they were drunk, ate too much molly, or were just riding the natural high. During Tweezer they migrated to the floor of the theatre and were dancing in the aisles and scurrying through the rows picking up stray glowsticks.

During Suzy the stood up front and were tossing glowsticks into the crowd. That was the pinnacle of the 3D viewing because I was fooled a few times by onscreen glowsticks versus the ones in real life. I managed to catch a real one in mid air and I returned it with a rapid-fire toss. I nailed one of the Phishy chicks square in the head from thirty rows back. Just call me John Elway.

A couple of other jubilant fans took the aisles to dance and groove. I popped a painkiller because I knew the film was 140 minutes long and I wouldn't be able to step outside for a smoke break int he parking lot. However, one daring pothead blazed up in the balcony.

"It smells like a Phish show now," mentioned Nicky somewhere in the middle of Undermind.

To sum up... hardcore heads might leave the theatre a tad disappointed because the setlist wasn't "sick as balls" and the 3D technology can't match the hardcore drugs ingested by fans which help tweak reality. However, the film is perfect for newbies and causal fans. If you think some of your friends or your new significant other might freak out if you take them to the lot of a show, then perhaps you should treat them to the Phish 3D movie so they can get accustomed to the music without being overwhelmed by the scene.
Labels: Phish 3D

Broseph said…
"The best part of the film for me were the behind the scenes practice session with Sharon Jones and the horn section. The little bit of Suzy Greenburg rehearsal stood out and I wanted more. I was excited to see more outtakes/footage during the closing credits"