Last Wednesday morning I got on a plane at 1am and flew to New Orleans for a long weekend at Jazz Fest. I had a fantastic time.

When I arrived at Blake's house in Metairie at 8am last Wednesday morning, it was a hilarious scene. Two couches, two friends passed out on them. A third friend was sitting in a chair in a drunken spun out daze. I got out my sleeping pad and went back to sleep. I had already practically stayed up all night on the flight and the tone was set for the next few days.

Friends trickled into New Orleans on Wednesday and by that night we had a solid group of 10, most all of us had met at some point on a previous Jam Cruise and became fast friends.

First up on our musical journey was the Megalomaniac's Ball at the Howlin' Wolf. Marco Benevneto Trio started at 10 PM, Dead Kenny G’s (Mike Dillon and Skerik) at 11 PM, the Stanton Moore Trio was at 12:15 AM, and Garage A Trois finished the evening 1:15 - 3:30 AM.

Anders Osborne played with the Stanton Moore Trio and rocked my face off. Anders came out looking like a thiner santa claus with his white hair and huge beard. Anders' performance was one of my highlights of Jazz Fest and I was caught off guard by how hard it rocked.

Garage a Trois did not disappoint, mixing Mike Dillion and Skerik's weirdness with some inspired playing by Stanton and Marco. They didnt wear jumpsuits, but certainly did some weird performance stuff including getting the crowd to stretch and do goofy yoga poses along with them at some point in the night.

Somewhere along the way at the Howlin' Wolf we acquired a hanger-on to our party. We all thought each other knew the guy and were being too nice to him since we thought he was someone's friend. This hanger-on was way too loud and couldnt stop slurring bad jokes and talking about "mawl". After the music was over, B_Psyde and I headed home at about 5am while the rest of the crew decided to go to a dive bar called Snake & Jake's.

There was a commotion back at the house when the crew finally made their way home after sunrise. Everyone was in rare form getting out of cabs at 8am. Our buddy Coteff somehow got left at Snake & Jake's when the crew rushed to get into a cab and lose the hanger-on.

A few quick hours of sleep we headed to the daytime Jazz Festival on Thursday afternoon. Coteff still had not made it home from the night before but our phone calls went unanswered. We were worried about him but as a Jam Cruise and Jazz Fest vet we figured he had it under control.

At the festival we caught bits of Dr. Claw, Gov't Mule, and sampled the food. As you know the food at Jazz Fest is incredible. I sampled a soft shell crab poboy and some spicy shrimp tacos. Both were amazing.

I met up with the Wookie, Tregan and Fink and we secured a spot about 30 yards back from the stage, School's side. Widespread Panic played a great festival set. I thought the first 6 or so songs was straight fire. The second half of the Panic set had a horn section which I thought was on point. I found many of the songs to be especially lyrically relevant to my weekend (Up All Night, Goodpeople, Dark Bar, You Should Be Glad, Ain't Life Grand). The setlist:

1 set: Love Tractor, Pigeons, Space Wrangler, Walkin' (For Your Love) > Blight, Thought Sausage, Imitation Leather Shoes > Jam > Proving Ground, Down*, Walk On The Flood > North, Up All Night** > Tall Boy**, Goodpeople** > Dark Bar** > Goodpeople**, On Your Way Down** > Bust It Big**, Ophelia** > You Should Be Glad**, This Part Of Town, Ain't Life Grand*
* with John Keane on pedal steel
** with The MegaBlasters on horns 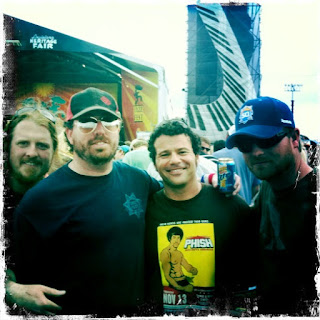 When we got back to the house to hit the reset button for the night shows we found out Coteff had been sitting in jail since about 7am that morning. He was picked up outside of Snake & Jake's for public intoxication. We never found out exactly what he did to get put in the drunk tank but it somehow involved dry humping a stop sign. The hanger-on also got thrown in jail. We scrambled to find one of us sober enough to go bail our friend out of jail, which was quite a challenge. B_Psyde came through for us and took one for the team- B drove to the jail and missed part of the Galactic show he had bought a ticket for.

Even with the setback of having a man down, our spirits were high and we continued the party. Lauren Sparkles finally arrived bringing fresh excitement and a suitcase full of sequin dresses. Rhonda, Leslie and I headed back to the Quarter to check out the Fantastic Hullabaloo poster show and the Dirty Dozen Brass band. Sadly there was not a crowd at the Hullabaloo.

At 2am we got the complete crew back together for Big Gigantic w/Murph (STS9) and DJ Rusko at Republic. The Big Gigantic set was amazing for my tastes and I had a great time. Here is a short video:

The time at the Republic after about 4am is a blur of heavy bass wooommppp and dancing. We left Republic at 6:30am and headed back to Snake & Jake's, but no one got arrested the second time. After a few car bombs for breakfast it was back to the house for some more hanging out and eventually some sleep.

Friday we took the day off from the daytime festival and had a crawfish broil instead. It was very nice to catch up on some down time and participate in a New Orleans tradition. 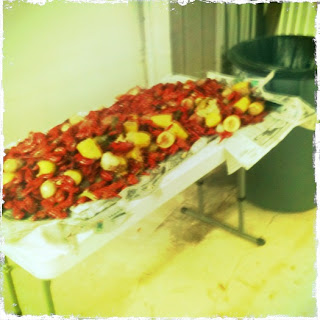 Friday night B_Psyde and I headed out to The Howlin' Wolf to catch Col. Bruce Hampton. Col. Bruce's band was impressive- they had 4 guitars on stage and three percussionists but managed to give each other space. Beautiful melodic guitar playing. Next at the Howlin' Wolf was Teresa Anderson with George Porter and Stanton Moore. Teresa has the voice of an angel and ripped it up on the fiddle.

The rest of the crew met up at the Dragon's Den at about 12am to check out Gravity A, an up and coming electronica local-ish 4 piece. The music had not yet started at the Dragon's Den and I took a stroll down Frenchmen St. Frenchmen is the local's version of Bourbon St. and it did not disappoint. There was a brass band in the street and street performers on every block. A few cars tried to make their way down the street without success. Frenchmen was not blocked off but there was a crowd in the street like it was shakedown after a Phish show, except people were better dressed. Hell, it was a festival block party. In case you didnt know, the bars never close in New Orleans and you can walk anywhere with alcohol, making the scene I saw on Frenchmen possible. There even was a tank somewhere as I saw people walking around with balloons.

We enjoyed Gravity A for a couple of hours then headed over to Tipitina's French Quarter for Some Cat From Japan: Music Inspired by Jimi Hendrix featuring Will Bernard, Nigel Hall, Scott Metzger, Ron Johnson and Eric Bolivar at 2am. The Touch Of Class Jam Cruise crew got a shout out from Nigel as we walked in. I can't wait to hear this band again on Jam Cruise - the Jimi Hendrix covers were on point and included just the right amount of jamming from the band to keep it interesting.

After Big Cat From Japan we still weren't done and neither was Gravity A, so we walked back over to the Dragon's Den for more dancing and hanging out on the balcony. As you can tell we love to see the sunrise and conversations with fellow club goers at 4-6am in New Orleans can only be rivaled by sunrise conversations of Las Vegas. Shennanigans.

The marathon continued on Saturday afternoon as I tried in vain to rally the crew to go to the daytime festival. This time only Andrew, JD and I made it to the festival grounds from the house. The Saturday crowd at Jazz Fest had to be twice as big as it was on Thursday. Galactic played as I tried in vain to navigate the crowd to find the Wookie, Tregan and Fink. I also couldn't find Leslie and Rhonda. Text messages stopped working in the enormous crowd for Pearl Jam.

As kind of a cheerleading move for myself to keep going I donned the WAKE UP AND RAGE/FUCK YEAH! yellow shirt. It was easy for me to be spotted - the positive comment count: 27. Pics: 10 Fuck Yeah!'s: 15. One black gentleman asked "rage about what?" and his wife answered "honey, it means he just likes to party." I rocked out at the back of the crowd for the first half of Pearl Jam. PJ knows how to work a big crowd and I especially enjoyed Given To Fly, Even Flow, Nothingman and Daughter. 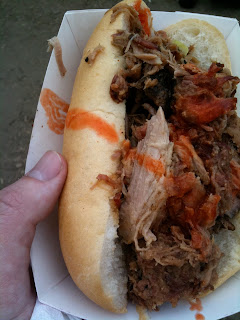 Saturday afternoon I followed the advice of Jazz Fest vet Andrew who guided me to secret porta potties without a line and I ate the best food of the weekend - the Cochon de Lait Poboy (pictured above). the We caught the tail end of Jeff Beck's set and I was impressed by his version of the Beatles' A Day in the Life.

Next was The Greyboy All-Stars on The Creole Queen Riverboat. By this time I was pretty tired but I had to keep going- my flight left at 6am the next morning. Greyboy played a pretty standard set on the boat and I got to enjoy a sick version of Nautilus with Tregan. It was fun to be on a boat again with the Touch of Class Crew and felt for a *second* like it was Jam Cruise. After the Greyboy Riverboat show we headed to Felipe's for some late night mexican food.

@B_Psyde, Lauren Sparkles and I pushed on to dance at Dr. Claw - Eric Krasno, Adam Deitch, Nick Daniels, Ian Neville and Nigel Hall. The club got me sweaty and I danced with a pair of girls from Dallas. at 4:20am I caught a cab from the French Quarter to the airport. My flight left on time at 6am. 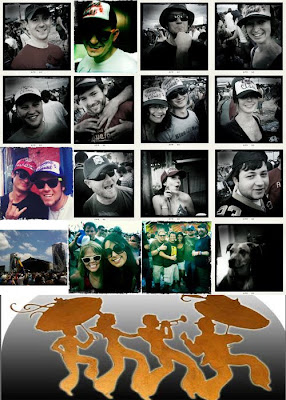 In summary, an amazing time for a music junkie. New Orleans is fun but really its the people that make a trip like this special. I got to sample many of the artists booked on next year's Jam Cruise and it has me pumped for the trip.
Posted by the joker at 4:20 PM

Sounds like a great trip...we will have to meet up soon... Lil sis said it rocked

Thank you for allowing me to relive the weekend! You were truly missed on Sunday!

Dry humping a stop sign...what a town that NO.

So you can pull out your boobs all over the place, but dry humping signs = jail time ! My kind of town !