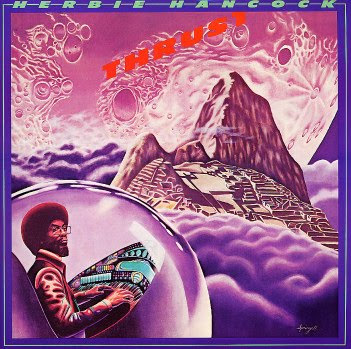 I put this album on Sunday afternoon while I was cleaning the house. It had been a few years since last listened, and wow had I forgotten how good it is! Thrust was released in 1974 and served as a follow up to Hancock's album, Head Hunters. Personally, I prefer Thrust over Head Hunters as there is more flow to this album. The lineup for Thrust is the same as on Head Hunters, except Mike Clark replaced Harvey Mason on drums. This is Herbie's thirteenth album overall. Many people say that Thrust is "THE BEST ALBUM EVER". I dont know that I would go that far, but it gives you an idea of just how good it is.
TRACK-LIST:

I gotta admit I know basically nothing about HH, but as happenstance would have it the wife/kid/dog & I walked over to his afternoon show at Ventura College yesterday afternoon. We hung around outside the fences, where the wind was blowing just right for the jazzy stylings of a 70 yr old Herbie to waft into our ears. Great stuff fo shore!

can't forget about Man-Child. That album hangs easily with both HHs and Thrust. "Steppin' In It" maybe the best Herb song of all.

thanks for the recommendation jonas.. I downloaded Herbie's discography awhile back and although I listen to Headhunters occasionally, I had not taken a listen to Thrust yet.

going to put it on sometime today!

I got to give it up for Manchild as my favorite, but HH and Thrust are both amazing also!!