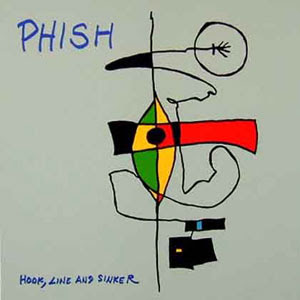 Updated in May 2010 (I originally posted this a few years ago. This is a new version, including 3 new cover tunes after Phish's 2009 shows.)

While Phish played hundreds of cover songs during their almost 25 year career, this list is narrowed to the covers most commonly played in order to maintain the "Phishy" feel of the mix. Therefore, the only songs included are those that Phish performed on 3 or more occasions in their career. There may be a couple of exceptions to this rule, but such songs were featured in particularly legendary set sequences.

Using these guidelines, the list was narrowed down to a more manageable number: 117. This amounts to just over 7 hours of music, spanning their career.

The compilation is entitled "Hook, Line and Sinker" in tribute to the late Kurt Vonnegut, a fan of Phish who several years ago painted cover art for an imaginary Phish album for Glide Magazine's article, "Greatest Album Covers That Never Were." Vonnegut's artwork is included as part of the ID tags for these songs. The artwork can also be found here: http://www.electricedge.com/greymatt...phish-kurt.jpg

The order of the tracks coincides with the chronological order in which these cover songs were debuted, i.e. Long Cool Woman was the first cover (and first song) Phish played live, thus it appears first in the tracklist. Listening to this tracklist gives some insight into the kind of music that was inspiring Phish at different times through the years. A shuffle gives them a different feel every time. Enoy.

The 3 new songs added to reflect Phish's setlists from 2009 are: How High The Moon, Oh! Sweet Nuthin! and Shine A Light, each of which hit the "3 times played" rule. For those who downloaded the previous version, I have included a separate link below with just these 3 new songs with cover art and tags to match the rest of the songs, although you may need to adjust track numbers.

A big THANK YOU to Chewbacca Wookie for putting this together!

Kid Dynamite said…
i think my favorite was Tears of a Clown - when they invited some girl from the audience on stage to sing, and it looked like it would be the mother of all train wrecks, but then the band fell into rhythm and picked up the girl and it was awesome
5/31/2010 8:04 AM

BTreotch said…
Wow.. Can someone throw this in the dropbox please?

Unknown said…
Nice to se this up here.

For the record, it is Chewbacca_Wookiee.

I have a 2011 updae of this compilation with 7 new songs added.

Songs added to this newest version include: Lee Dorsey’s Sneakin’ Sally (instead of Palmer’s), Halley’s Comet, I Didn’t Know, Ramble On, After Midnight, Torn And Frayed and Fat Man In The Bathtub.
4/09/2011 12:12 PM