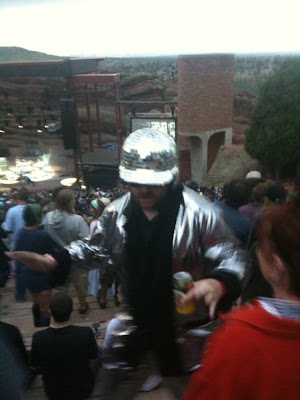 I had an amazing time at Bisco Inferno.

Saturday was an absolutely gorgeous day in Colorado and it was the first concert held at Red Rocks in 2010: Bisco Inferno.

Jonas and I got down to the lots about 4pm and there was already a raging party in the lower south lots where the Basics Fund buses were circled. I walked around, socalized, and took pictures with people who loved my outfit. I debuted the Disco Ball outfit- helmet, jacket and pants. I had made a couple of extra disco ball helmets and I was able to sell one in the lot. Initially he didnt want to pay as much as I was asking, but he loved it so much he took a collection from his friends and bought the helmet. I saw him later on in the night and he gave me a huge hug, saying "this is the best thing I have ever bought in the lot!"

We headed in around 5:30 pm and music was already playing. The crowd was easy to move around in and Red Rocks was about 1/4 full at the beginning. For most of the Aeorplane and Crystal Method DJ sets I walked around socalizing with my friends. I thought the two DJ acts sounded good, but they could not keep my attention without playing instruments or lights.

The Glitch Mob came out next with some sort of new electric drum set up. The Glitch Mob was trying to prove to us that they were now a live band rather than just 3 DJs hitting F5 on their laptops all night. Ironically, The Glitch Mob had a major glitch in one of their laptops, forcing them to shut down the machine and stop their performance mid-song. A major Milli Vanilli moment and quite embarassing. The crowd was nice enough not to boo, but when the Glitch Mob finished their awful set Red Rocks was dead. silent.

To add to my crazy Inferno experience, my buddy Dave got me a will call front row ticket. I am not exactly sure how Dave ended up with the extra ticket, but he gave it to me and I was able to ask my friend Paco to come down to the front row with me. 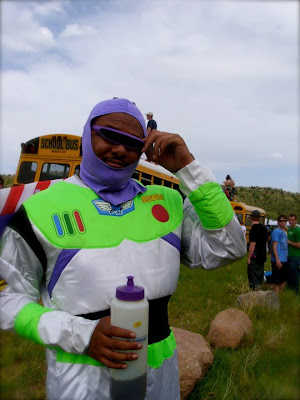 Paco had traveled from Florida for the shows and was wearing a Buzz Lightyear costume. Paco's birthday was the night before and his motto at Red Rocks was "To Inferno! and Beyond!" It was awesome to have a friend in an equally awesome/ridiculous outfit to dance with down front.

Next up, the main event- The Disco Biscuits. Paco and I raged the front row, dancing without stopping the entire first set. The set list:

It shouldn't surprise you when I say the first set of Bisco Inferno was my favorite set of Bisco I have ever seen. I was front row in a Disco Ball outfit with Buzz Lightyear at my side and Bisco played some of my favorite songs. I thought the set was fire. Its hard to give an unbiased review, but I really thought Barber was playing better than ever. After seeing Barber come back this weekend I think the broken wrist is a blessing in disguise - he seems to be playing with more patience and precision.

At Bisco set break I retreated up to the 35th row to hang with a group of friends and get some rest. Booka Shade played set break and I enjoyed most of their set sitting down. They were an awesome act live and I would have gotten up more, but I was saving my legs for the rest of the night.

One of the funniest things happened next. I hope this story does not come off as creepy, if it does- believe me, it was all in good fun and its not something that happens to me very often. During the Booka Shade set I ran into a cute red head. I had met her couple of weeks earlier at Arapahoe Basin partying on the Beach. She was into the disco ball outfit and it seemed like she was going out of her way to talk to me - this had to be the third time that I had "run into" her. We danced a bit and we were speaking spun out talk. In our spun out states and the loud music I was understanding about 1/2 of what she was saying. I remember her leaning into me and asking "do you need anything?" to which I replied "yeah, I need a kiss." Boom. A fun, quick make out session at Booka Shade set break thanks to molly and a disco ball helmet. Soon after that Booka Shade's set ended and I made my way back down to the front for the second set of the Biscuits.

The entire night I talked, shook hands, gave hugs and high fives with a LOT of people who admired my outfit. I felt like the Mayor of Red Rocks. Most everyone was really awesome. There was one interaction that I thought was a little weird, funny and caught me off guard. A cute blonde surfer chic in a tank top and cutoff jean shorts came up to me and said, "I think we know each other." "Oh we know each other, how is that?" My guard was a little up because this girl looked was way too young for me and I didnt know if her mom was around the corner. "Well, we know each other. We make a good pair." "Ok, so how do you think we know each other?" "Well, I shine, you sparkle. We should be together tonight." I smiled and was tongue tied. It was quite the pickup line coming from a 17 year old. (pictured here, making the heart with her hand and in the orange top) I retreated to my spot at the front row, laughing at the power of the disco ball helmet.

The second set of the Biscuits started out strong with House Dog, but I felt overall the set had a weird flow. By the time the epic Magellan came on, I was back a few rows with the Boulder Bisco crew in the crowd and found myself a little bored. Brownie remarked how Colorado was "their best market" and they played Home Again for the encore. I felt it was a fitting song for Barber being back on stage and the Biscuits finding a strong fan base in Colorado. The show ended past 1:45 am and I ate a late night 3:30 am breakfast at Pete's Kitchen on Colfax.

Download/Listen at Archive.org
Posted by the joker at 4:20 AM

those helmets are lot gold

Hahaha I remember seeing you there!!! That helmet was unforgettable :)