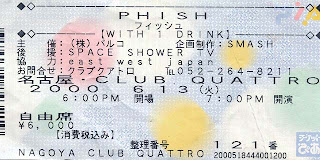 As we entered the bullet train in Tokyo's central station, twelve or so other Americans on their way to Nagoya were getting settled into their seats. I introduced myself right away.

"Hello everyone, if I could get your attention please, my name is Pauly and I am an alcoholic."

The car erupted in laughter. I pointed to Señor and continued, "This is my side kick and attorney, Señor. We will be entertaining you all for the next two hours on our way to Nagoya."

A light round of applause made its way around the car. My icebreaker worked and I was known as "the drunk guy on the bullet train" for the rest of the Japan tour. As we walked to our seats I overheard one phishy chick mutter to her friend, "They're funny. But the cute, smiling, little hairy one doesn't look Mexican, does he?"

The Phish Japan tour journey continued with a stop in Nagoya. We had a rare night off and explored the city. We got shitfaced and drank tequila with locals at a place called the Parkside Bar. Then we wandered back to our hotel at 3am through the Sakae district where there were tons of bars and clubs. The nightlife was alive and kicking for a Monday night!

"Mr. Yankee, do you want massage from sexy Japanese girl?"

Tiny adorable girls who worked at the massage parlors were very aggressive. They walked right up to every Gai-jin and pimped themselves. Even if you tried to cross the street, they followed and persuaded you with hand jesters and broken English to have an "authentic Japanese massage." And when you declined, they followed you for a block or so until another group of girls from another massage parlor stepped in and repeated the process.

One girl tricked us. We thought we were going into just a regular karaoke bar. It only took me a few moments before I realized that we were the only guys in the club. About thirty or so of the most beautiful Japanese women stood before us, all of them with their eyes fixated on Señor's huge smile. I arrived at a moment of clarity and tapped Señor on the shoulder. I whispered in his ear, "Bro, either we are in the coolest bar on the planet, or we just walked into a whorehouse."

* * * * *
I spent the day of the Nagoya show shaking off a wicked hangover. Senor and I wandered over to Nagoya Castle to take some pictures and see the Golden Fish. We some great sushi for dinner then headed over to Club Quattro. We met up with my friends, Kimi and Aki from Osaka, in front of the venue downstairs on the street. Kimi was excited because she had just met Page. He signed an autograph and took a picture with them.

The venue was located on the 8th floor of a department store and we had to take escalator up to the show. The venue was tiny, smaller than the Wetlands in NYC. Maybe 300 people max were at that show? The bouncer gave you a drink ticket when you entered. Yeah, you got a free beer with admittance!

The sound was pretty good for a sweat box. The boys were bunched together on stage... and did I really witness one of the best Phish shows ever? Quite possibly. It was one of the best shows on the Japan tour... and one of the greatest shows I have ever experienced.

An eruption of funk started the show with a bong-rattling Meat before Fishman took everyone on a demented and twisted journey with Maze before a Meat Reprise. They soothed the crowd with a mellow FEFY followed up by a country song. And from that point on... the rest of the show was almost sheer perfection.

Wilson was intense, sick, and heavy metal loud. Mike's > Simple > Weekapaug was the heart and soul of the show and one helluva a way to end a kick ass set. Mike's Song was simply sizzling. 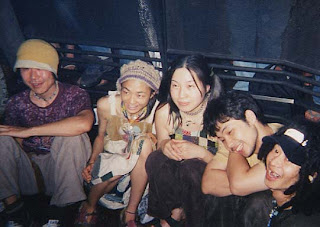 Japhans - Kimi and Aki
The second set opened with Gotta Jobboo which was a heavy fan favorite. The highlight of the set was a funkified and heady Wolfman's Brother that will go down as the best version that I ever saw live and in person. Seven minutes in, they just tore it up and Trey went off the deep end at the 8:30 mark.

They kept up the intensity with Antelope > Contact and you could feel the floor vibrating when everyone jumped up and down during Antelope. Heck, they even played Rocky Top!

We got a double dip for the encore with B & R and a long awaited cover of Good Times Bad Times. Insane. The place was so crowded and suffocatingly hot that Senor almost passed out.

As the stunned crowd exited the venue, it started to rain fairly heavily. Exhausted, drenched in sweat, and dehydrated, we slowly walked back and stopped at a vending machine to buy a beer because you can buy beers at vending machines in Japan. What an amazing concept!

The cool rain soothed us as we walked back to the hotel in a befuddled silence after seeing one of the greatest Phish shows of our lives. I'd end up seeing 151 and Nagoya was in the Top 5. Easily.

The rain drove away the hookers and we stood by ourselves on a corner in silence and sipped our beers in the rain as we soaked up the entire vibe of Japan.

The combination of Phish and the nighttime Nagoya rain was something that I will always remember as one of the most calming sensations in my life.