Skip to main content
Labels
Posted by the joker June 26, 2010 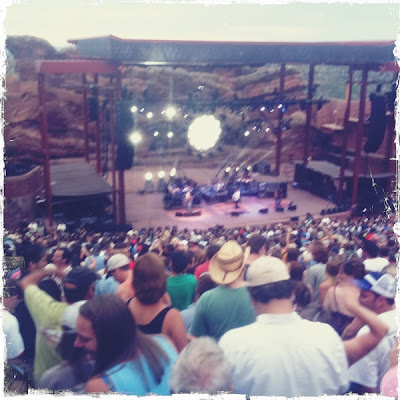 I sometimes think I am one of the most fortunate people on earth. I have a wonderful family of friends, I love my home, I have a good career, and get to follow my passion for live music and skiing. Overall, I am very thankful. Things seem to work out for me and I manifest my wishes.

But it seems that when it comes to me and party buses, I am cursed.

Last night I took the party bus from Cervantes out to the Red Rocks Panic Shows. It was a 50 ft coach bus, and was billed as having a DJ included. Turns out the DJ was really just a burned copy of a Panic DVD. I boarded the bus and quickly met our bus driver, Charlie. Charlie kind of reminded me of the guy from Office Space who wants his stapler back. Charlie quickly informed me that:
1) he had never driven this type of bus before
2) he was flown in from Phoenix for the weekend and did not know how to get to Red Rocks and we would have to navigate and
3) he didnt know how to work the DVD/Stereo/Radio.

Great. I attempted to hook up the music on our bus, or even get the Panic DVD to work, to no avail. Whatever, we can ride to the show without tunes, no biggie. Upon getting to Red Rocks I navigated the very nervous driving Charlie to the lower south lot where all the other buses were. Kind of disappointing we didn't have any tunes, but I guess its the sacrifice you have to make to drink on the way to the show.

The lot scene at Red Rocks was fairly tame. It kind of surprised me. I socialized and drank for an hour and then headed into the show about 7. The Panic fans continued the tradition of tarping down the first 40 rows at red rocks to keep space for their "crew". I found a group who had tarped down a large area at row 30 Jimmy side. Compared to previous years it seemed a lot less crowded and I didnt run into any tarp nazis throwing elbows. Maybe the average Panic fan has gotten older and is taking fewer whiskey shots? For wahtever reason, there was plenty of room at the sold out show and the crowd was pumped. 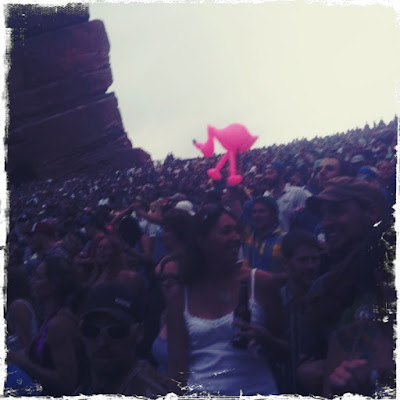 Panic started at 7:23 and it was daylight for most of the first set. The setlist: 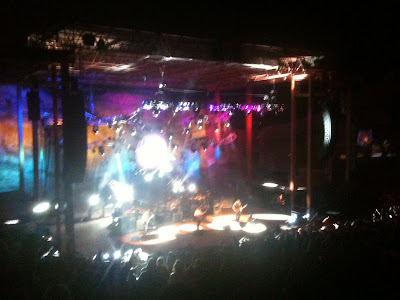 Encore Let's Get The Show On The Road > Ain't Life Grand^

The highlight of the show for me was the first set. The opening sequence of Airplane>Take off Jam>Vacation>Pigeons had everything - it was a beautiful up and down rollercoaster and Panic was tight from the first note. Karl Denson came out and added a perfect accent to Tie Your Shoes > Red Hot Mama > Tie Your Shoes. The first set ended at dusk and it felt like a second set.

I enjoyed the second set as well, with the Fishwater>Drumz>Fishwater being the standout. Honestly it was a little hard for me to be present at the Panic show during the second set because my phone was blowing up with text messages about the Phish show. There is something in the planet cycles, folks...all of our bands are playing well at the same time this summer in 2010.

Ain't Life Grand never gets old with me and I felt it was the perfect closer. I quickly said my goodbyes and made my way as fast as I could to the party bus.

A great Panic show...now for more about the shit show.

There were originally 6 party buses that left Cervantes, but there was no rules about which one you could get on. The bus I had ridden down was just about to leave and was full of people who had not ridden down on it. I was literally the last person on the bus before we started moving. I found my cooler with a sandwich I had saved for a post show snack and popped a cold beer. As I had taken 1 bite from my sandwich I hear Charlie the bus driver yell "Where is the DJ? Mr. DJ, come up here, now!!!" I get up and Charlie is paniced. He had driven into a dead end in the parking lot and could not get out. Ruh-roh.

I spent the next 20 minutes spun out in the parking lot with a sandwich and a beer in my hand attempting to direct Charlie the Bus Driver in backing the 50 ft bus out of the Red Rocks parking lot. I was outside yelling "Turn left!" "ok go straight!" "Cut your wheel all the way to the left!!!" "STOP!" What a shit show. Charlie managed to brush a Honda Element in the lot and had to stop to give insurance information. Jesus.

We finally make it out of the Red Rocks parking lot and navigated Charlie back to Cervantes. 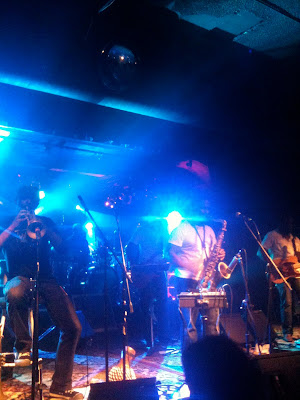 The aftershow was billed as the Power Jam: Ivan Nevelle, most of Karl Denson's Tiny Universe, Adam Dietch, Tony Hall, and even American Idol Taylor Hicks rotated in and out. It felt like I was back on the Jam Cruise boat in the Jam Room. The funk jam was sick and went long into the night...I finally called it a night at 4 am.

BTreotch said…
funny after the fact I hope..